If you're one of the few, the proud, still using an antenna to watch television, congratulations.  You're part of a dying breed.  Between cable and satellite, more than 80 percent of us watch the boob tube with an assist.  For a lot of years cable and satellite grabbed those over the air signals for free.  But over the last 20 years broadcasters have forced cable and satellite to pay up for use of that free signal.

Why I am writing about this?  Because something transcendent is coming the way of television's way and it could be a game changer in the same way the Internet has destroyed the newspaper business.  A tiny company named Aereo wants to take those free TV signals, feed them into an app, that you can pay them for so you can watch television on your hand held device, laptap, or pc.

As you can imagine broadcasters aren't happy about this.  They've gone to court twice to stop Aereo and twice they've lost.  Now broadcasters, at least one in particular, FOX, is threatening to do the unthinkable, stop broadcasting.

Let me say that this doesn't surprise me one bit.  This is a train that's been coming down the track for for the better part of a decade.  I think in 15 years, probably a lot sooner, broadcasters will stop broadcasting.  Obviously television can be delivered quite easily now over the Internet.  But there are a lot of good reasons to give up TV the way we know it.

First of all, it costs a lot of money to put a television signal up a tower and out to homes across the area.  The electric bill for a typical television station over the course of the year tops 6 figures.  Then there are the costs associated with the upkeep on those big towers and the transmitters.  It's not cheap.
Second, pulling the plug on over the air television would do away with government control.  TV stations wouldn't have to worry about the Federal Communications Commission and their nonsensical rules that burden television owners.

I find cutting off the FCC at the knees a delicious thought.  You see, the same bible bangers who bitch and moan about too much government regulation are the same morons who wailed when Bono dropped an "F" bomb during the Grammys or when Justin Timberlake helped Janet Jackson give the nation a Super Bowl flash.  Without the FCC looking over their shoulders broadcasters wouldn't have to worry about the nasty fines that come with such incidents. 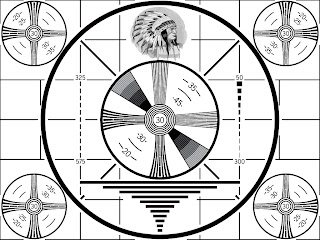 Free television is going away my friends.  The big cell phone companies want the band width that broadcasters currently hog to help that new iPhone or Droid you own work that much faster.  The economics say that television by Internet or by wireless is going to be more cost effective.

The troubling part will be if the networks decide in the long run to ditch their affiliates.  That means your local television providers will have to come up with a new source of programming.  I believe in the long run it will only further consolidate the ownership of television stations, something I've railed against for a very long time.

Broadcast television is at a crossroads.  For the local broadcast stations this could mark the beginning of the end.  It will likely mean in the long run, fewer sources of reliable information.  Good God, I'm glad I'm nearing retirement!
Posted by Rink's Ramblings at 6:01 PM