As I walked down my block cooling down after an 8 mile run I spotted a dime on a driveway and thought of my friend Craig Davidson.  I bent done and picked it up, noticed that it was pitted and worn and wondered how long it had sat there.  Craig has been picking up money at an epic rate for nearly 3 decades.

Craig is probably the best known runner in Phoenix, Arizona.  He owns a daily running straight that dates back to the late 1970's, is slowly closing in on 200 marathons, and all the while works at one of the city's best known running stores, Runner's Den.  Craig's streak has come at a cost.  He deals with one injury after another.  I don't know how he runs through them. 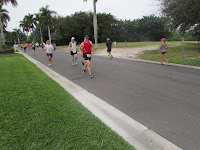 I write this because I am once again, slowly grinding my way back from injury.  That's why you haven't seen any posts about my racing this spring.  While running the Naples Daily News Half Marathon back in January a hot spot popped up at about 9 miles in my right calf.  It didn't really bother me but it did cause me to back off my pace at the time.

After a day's rest I went for a 4 mile run and my calf got incredibly sore.  It wasn't a muscle pull, but something else.  I went to my chiropractor, tried cross training, and a lot of rest but nothing seemed to help.  It felt as if a red hot poker was jabbing at the muscle.  I could run short distances after a month but it wasn't getting any better.

Another good running buddy Chris Ronan sent me an article from John Parker, a pretty fair miler in his college days and the author of the best fiction piece about running called "Once A Runner."  Parker described it as a calf heart attack.  He detailed my problems to a "T" and offered a solution that worked.  By early March I was back running again.

What's frustrating is that runs of more than 4 miles are tough to do at anything other than an exceedingly slow pace.  I don't have any pep or snap to my legs.  My weight is actually pretty good so I attribute it to age.  I'm just happy that I can run, even it is at a laggardly pace.

The biggest disappointment is that I haven't been able to race.  I don't even feel like racing.  This spring will be pretty much a washout.  It's a shame because we've had the most incredible winter/spring for running.  We still haven't been hit by the humidity that usually rolls in by late March.  I might, might try to run a race in late April, just to blow off the rust.
Posted by Rink's Ramblings at 5:27 PM