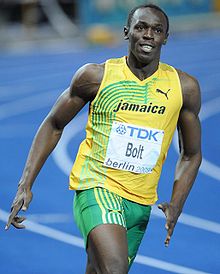 London looms in less than two months and two men could establish themselves as the greatest Olympians of all time on the track.  First the case of Usain Bolt, the Jamaican who turned the world of sprinting upside down.  Bolt owned the Beijing Olympics in 2008 with world records in the 100 and 200 meters and a took down a third with his teammates in the 4 X 100, the last of his three gold medals.

Bolt could firmly establish himself as the greatest Olympic sprinter of all time (if he hasn't already) ahead of greats like Carl Lewis and Jesse Owens by just winning either the 100 or 200 in London.  Right now he is the odds on favorite and only two of his countrymen, Yohan Blake and Asafa Powell, and two Americans, Tyson Gay and Walter Dix, appear to have any hopes of slowing down the great Jamaican. 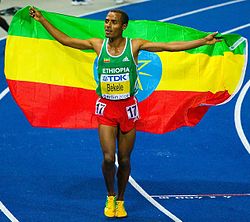 Then there is the great Ethopian Kenesia Bekele.  Many already consider him the greatest distance runner to have ever lived.  I think one more gold medal would remove any doubt that Bekele has surpassed his countryman Haile Gebrselassie.  Bekele has 4 Olympic medals, 3 of them gold.  He owns 6 World Championship golds and 1 bronze.  A victory at 10000 meters for Bekele in London would erase any doubt about his stature as the greatest.

But Bekele has looked vulnerable this year.  He ran a well beaten 4th in Eugene this weekend at 5000 meters.  He has run only 1 quality 10000 in the last three years.  A win by Bekele would be one for the ages.  He must defeat American Galen Rupp, Britian's Mo Farah, and a 5 other great runners from Kenya and his own country to claim his 3rd gold medal at 10000 meters.  London is calling and I for one cannot wait for 2 weeks of incredible track and field.
Posted by Rink's Ramblings at 7:57 PM