The U.S. Olympic Track and Field Trials got underway tonight promising an incredible 10 days of action.  The two 10K finals marked a milestone in Kansas City area distance running history.  Matt Tegenkamp and Amy Hastings both attended high school in the metro area.  Both were on the outside looking in coming into these trials.

Tegenkamp has been one of the best 5K runners ever following a great career at Lee's Summit High School and Wisconsin.  A former Olympian, he had become something of an afterthought despite running a very good 10K debut last spring at Stanford.

Tegenkamp kept his eye on Galen Rupp and Dathan Ritzenheim throughout tonight's final.  When those two began to push the pace Tegenkamp smartly latched on the ride for the last 3000 meters and finished second securing a trip to London. 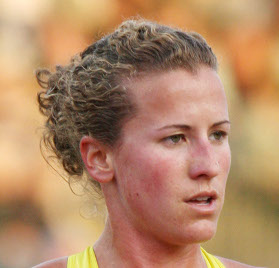 The bigger surprise came from Amy Hastings.  The Leavenworth High grad who attended Arizona State had finished a heart-breaking fourth at the marathon Olympic Trials in Houston back in January.  She had only one option and that was to try and land a spot on the team at 10000 meters.

Hastings started pushing the pace after 5000 meters.  Not known as a great kicker she dug deep as first Shalane Flanagan, an Olympic bronze medalist, and then NCAA Champion Natosha Rogers rolled by her on the back stretch of the final lap.

You could see Hastings eyes squeezed tight in determination.  She had a spot secured having run the Olympic qualifying standard earlier in the year.  But she dug deep and raced around the home stretch to an amazing victory over Rogers and the USA's greatest medal hope in the marathon, Shalane Flanagan.  For Hastings the win was redemption for a lot of hard work and a lot of races were she was just this close.  Here's to Amy Hastings, Olympian!
Posted by Rink's Ramblings at 8:23 PM