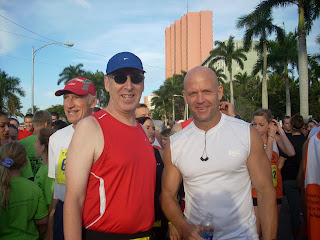 I've got a neighbor who took up running in the last 9 months or so.  Chris King is a hard working entrepreneur who would readily admit he had gotten a little chubby.  Now I'm the first to admit that my body is soft and I could stand to lose about 10 more pounds.  Chris needed to lose about 30 when I left for California in 2010.

When I got back last summer I noticed that Chris had slimmed down considerably.  He was fit and getting fitter, downright ripped as a matter of fact.  Not bad for a guy approaching his 50th birthday.

So this Saturday night happens to be when they put on the biggest local 5K right before the Edison Festival of Lights parade.  It's a lot of fun because it's run right before dusk, usually in great weather and in front of an appreciative crowd along the entire out and back course.

I wasn't sure if I would run Edison this year.  I lost nearly a month of training with a hamstring problem that plagued me in January.  But I knew I needed a rust buster if I'm going to tackle a big local half marathon in another couple of weeks.  I went to the race hoping to run faster than I did the last time two years ago even though I had fewer miles under my belt for the year.

Then there was the Czarina egging me on.  She wanted me to race because Chris was running as well.  I think she is trying to stir up a little rivalry with the neighbor.  Far be it for me to disappoint her. 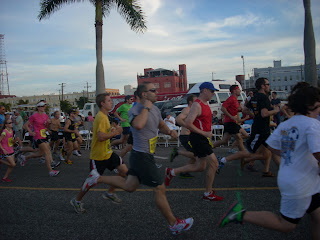 When the gun went off I felt out of sorts.  I thought I got off pretty well but then a guy in my age group rolled by me after the first quarter, a guy I normally beat and I knew I had to get moving.  I never felt quite right and when I hit the mile in just a touch over 7 minutes I thought maybe I can hang on and run low 22's which wouldn't be half bad.  But it wasn't to be. 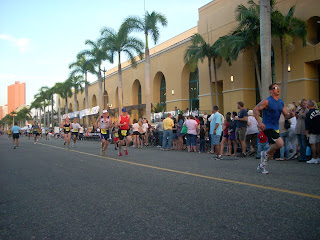 I didn't die but I certainly started doing the slow fade.  A group of guys my age caught me about 3/4's of a mile from the finish.  Shortly after that Chris rolled up on me with a hello.  He hesitated so I tried to push a little to see what he would do.  It took him about one block to regather himself and fire on by me.  He put a good 20 seconds on me over the last half mile. 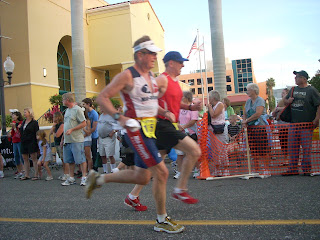 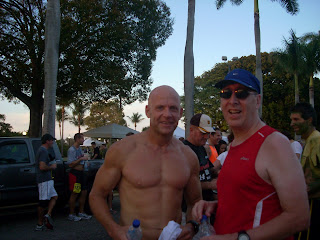 Chris should feel good about his progress.  I know I feel good about mine.  The half marathon in two weeks should be an even more interesting test.  My strength against his speed.  He's never run a half.  It could be interesting, the doughboy against the lean mean running machine.
Posted by Rink's Ramblings at 8:55 PM