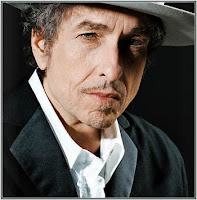 A lot can happen in 50 years.  From the time Bob Dylan arrived in New York City in the winter of 1961 he's carved out an astounding nitch in American music that is as vital today on the occassion of his 70th birthday as it was when he penned iconic songs like "Blowin in the Wind" and "Masters of War" in his early 20's.  Less than a half dozen American artists can make such a claim.  And fewer singer-song writer's are in that esteemed group.

I was a late bloomer as a Dylan fan.  It wasn't until the night of my graduation from high school that I experienced a mind-blowing night with my favorite high school teacher Tony Gauthier, listening to early Dylan.  I was vaguely aware of Dylan's music but hearing songs like "Talkin' World War Three Blues" and other gems from those early albums opened my eyes and ears.  How could one not be captured by a song like "Love Minus Zero, No Limit."

Later that same summer I was at a party following an epic three hour Crosby, Stills, Nash, and Young concert when Steve Woods put "Blonde on Blonde" on the turntable and I was captured by the wild, thin, mercury, sound.  I began buying Dylan albums and the rest as we say is history.

I will admit Bob lost me when he went through his Christian phase in the early 80's.  It wasn't until the early 90's when I stumbled upon "Empire Burlseque" and teared up at hearing "Emotionally Yours" that I realized that Dylan could still make relevant music.  While much of his music was hit and miss during that period Bob Dylan somehow pulled his talents together to make four unbelievable albums over the last 15 years.

Yes, his voice is worn and frazzled, but listen to the message, not the messenger.  He speaks the truth about life, love, and the inevitable decline that comes with age.  Bob Dylan can still deliver the goods even at 70.
Posted by Rink's Ramblings at 11:24 AM