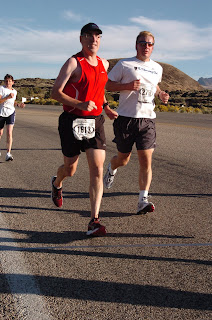 I'm not going to lie.  The last six months have been something of a grind.  Ever since the St. George Marathon my zest for running has waned.  Part of it was due to the weather, nasty weather in Sacramento.  Part of it was from the mind-numbing pressure that came from work.

I've run one race since St. George.  I took part in a marathon relay in December.  It was eight hilly miles run at 8 minute pace.  The very thought of running fast or even attempting to race held no interest.  I just tried to run even to make sure I didn't get completely out of shape.  It's been a lot of 18 and 22 mile weeks.  That is until this last week.

I managed to get in 31 miles.  It's not a lot but it's a start.  It's the end of May and I'm barely over 400 miles for the year.  That's about 200 less than where I was at a year ago.  The weather this week was almost perfect.  Every run felt light and easy.  The biggest impediment now to any serious training is my right hip.  It hurts, not a lot, but it hurts.  I don't walk with a limp.  I don't run with a limp.  But I can tell near the end of any run of more than an hour that it's a problem.

It's a dull ache about half the time.  A lot of the pain depends on where I sit and how I sit.  Sometimes it keeps me awake at night.  It's sad to think that at some point I may need a hip replacement.  But I feel better about my running now and the thought has crept into my mind that a little fast running wouldn't hurt, maybe even a race.
Posted by Rink's Ramblings at 5:34 PM