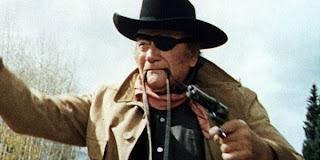 When I first heard that Hollywood was serving up a new version of "True Grit" I thought, why?  When I heard the Coen Brothers were at the helm of this re-make I thought hmmm.  I remember seeing the movie as a teenager in Abilene, Kansas and loved every minute of it.  The epic gun battle where Wayne grips his reigns in his teeth and shoots it out at a full gallop really began my love affair with this larger than life movie star.

I remember Oscar night in 1969 hoping that Wayne would win the Oscar and how touching it was to see such a big screen hero turn soft with a statue he probably didn't deserve.  But watch his movies that he made with John Ford and tell me he didn't deserve an Oscar for his epic anti-hero in "The Searchers" or for his role in "The Man Who Shot Liberty Valance", but I digress

So this afternoon I went to see Joel and Ethan's effort to bring "True Grit" to the big screen.  They made a movie that couldn't have been made in the late 1960's.  Nevertheless the Coen's managed to make another great film.  The acting is superb.  Jeff Bridges is wonderful in the role made famous by Wayne and his supporting cast is so much better with Matt Damon, Josh Brolin, Barry Pepper, and Hailee Steinfeld, than the original cast, it's not even the same movie.

And true to their nature as film makers, the Coen's bring the grit to "True Grit."  Are these guys the best filmmakers over the last 20 years or what?!?  Go see it, I think even the Duke would agree if he were still around, it's a great flick.
Posted by Rink's Ramblings at 12:18 AM