I've been working for 32 Christmases or so.  I can say that most of the time the television stations I worked at rarely held a Christmas party and often gave a turkey or a coupon to the grocery store as a Christmas gift or "bonus."  In those 32 I received one "bonus" and it was a nice one when I worked as a news director at WPSD in Paducah, Kentucky.  And my old boss at KVLY in Fargo, Charley Johnson, always scheduled the Christmas part in January at the beginning of the budget year to make sure it didn't get cut and always offered great door prizes.  But a lot of years there no gifts and no parties.

Besides the bonus the best gift I can remember getting was a wristwatch at a station Christmas party when I worked at KTSP in Phoenix.  It was a cheap watch but I still have it though I've never worn it.  It makes for a nice memento, especially since the call letters are no longer in existence.

News10 held a Christmas party which was great from what I heard.  But I was recovering from a nasty sinus infection and couldn't drag myself off the couch to attend.  Nevertheless the station did give out the best holiday gift I've ever gotten from an employer other than cash. 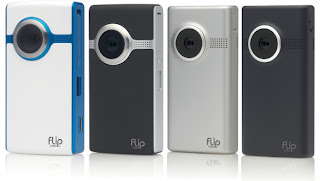 I've been so busy with work and dealing with another illness (I won't bore you with the details) that I haven't even gotten it out of the box.  But as I laid around my apartment staring at the box tonight, completely worn out from a lack of sleep and a long day at work, I couldn't help think about the double-edged sword that this particular gift represents.  It's a not so subtle reminder that this is an item we should carry with us at all times in case we come across a news story.  Still, it's a heck of a gift.
Posted by Rink's Ramblings at 10:39 PM