I jumped on I-80 and headed west last night deciding to abandon work for a little Kansas basketball.  It was a shockingly easy drive to Berkeley and a surprisingly easy ticket.  The game was nowhere near a sell out and Kansas fans easily made up one-third of the crowd.

It would be my first chance to watch the Kansas Jayhawks in person against the Cal Bears at the Pete Newell Classic.  It was K.U.'s first game at Cal since Wilt Chamberlain wore the crimson and blue.  Right from the beginning I thought I had traveled back in time.  I hadn't seen play this rough since the mid-1970's since players like Al Eberhard and Jim Kennedy roamed the baseline for Mizzou and Ernie Kuysner did the same for Kansas State. 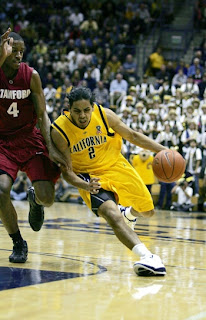 It was all because of this guy, Jorge Gutierrez.  He's easily the dirtiest player I've seen play in person in more than a quarter of a century.  He pushes, grabs, shoves, and in one instance, tried to bar arm choke his opponents.

The first instance I noticed followed a slight push he received from a Kansas guard Elijah Johnson.  Gutierrez responded by riding Johnson across the lane up underneath Johnson and then flopping when Johnson tried to back off.  The play worked and Johnson got whistled for the foul.

Then when Thomas Robinson got tagged for a flagrant on Gutierrez what the officials failed to take into account was the two handed shove then the arm wrap that he used to draw Robinson's ire.

The incessant grabbing and pushing continued and climaxed when as Gutierrez lay on top of Robinson on a held ball he shoved his forearm across Robinson's throat.  How he didn't get tossed for this move is beyond me.

Now I write all of this knowing full well that the Morris twins are no angels.  They like to mix it up.  Marcus let his emotions get the better of him when he finally threw an elbow at Harper Kamp.  What you couldn't help but notice was that Kamp and fellow Bear big man Markhuri Sanders-Frison continually shoved all three Kansas bigs every time there was a contested rebound and were continually going over the back for rebounds without getting called for it.  In fact on the elbow play Kamp came running down the lane and tried to shove Marcus out of the way which resulted in the first swing of the arm which was followed by full contact.

The Pac 10 needs to take a good look at Gutierrez and his play.  If he continues to play like this he's going to get an ejection or two before seasons end.

Though rattled Kansas never succumbed to the poor officiating and the physical play.  Josh Shelby has shown that Xavier Henry won't be missed.  Shelby wants the ball and isn't afraid to take the big shot.  He's Sherron Collins but five inches taller and a better outside shot. I'm not sure that this Kansas team is capable of a big run this year but there's no reason why this squad can't make another trip to the Sweet 16.
Posted by Rink's Ramblings at 11:43 AM