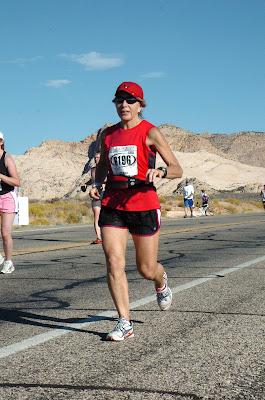 The Czarina is the toughest person I've ever known.  She will work herself to exhaustion and come back for more.  I realized it when shortly after our marriage she took out a patch of thick vines along the back of our house on a hot summer afternoon.  When I asked her what in the world she thought she was doing our response was, "Now you know why the Russians won the war!"

It wasn't long after that the Czarina took up running.  Within a few months she became a great running companion, often pushing me in our workouts.  Without telling me in the weeks leading up to the St. George Marathon the Czarina was suffering with plantar fasciitis.  Shortly after her return to Florida the pain in her foot became unbearable, the Czarina even resorted to using a cane to aid her in walking.  I can only imagine the pain she had been dealing with leading up to the marathon.  If you've ever had plantar it's no picnic.

Much to her chagrin the Czarina hasn't been able to run on a consistent basis since early October.  To add to her misery she bumped her foot into a door jam two nights ago.  Given her description of the pain and the color of her foot I advised her to go to the doctor.  She refused.  Tonight I got a tearful phone call because she did it again.  I scolded her for not going to the doctor, who would have probably put the injured foot in a protective boot.  She promised to go to the doctor tomorrow.

It just goes along with the time I told her not to go up on the ladder to cut a tree limb by herself, immediately ignored me and went out and broke her wrist.  I think if you looked up the word stubborn her picture would be next to it!
Posted by Rink's Ramblings at 11:14 PM