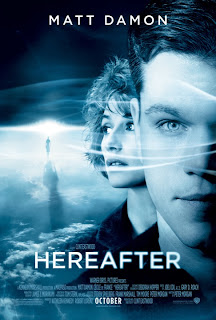 I'm a sucker for a Clint Eastwood movie.  He's directed three classic movies beginning with 1992's "Unforgiven."  "Mystic River" and "Million Dollar Baby" would also fall into that category although for my personal taste "Gran Torino" is better than either of those two movies.

I had not gone to a movie theater since moving to Sacramento in June so despite suggestions that I make "The Social Network" my first cinematic experience here, it didn't fit my schedule so I opted for Clint.

The subject matter is one all of us face, death.  The big question Eastwood tackles is what awaits us after life.  It's a good story but not a great one.  It all seemed rather cliched.  But I ached for the boy who lost his twin brother and felt empathy for the other central figure, a French journalist who barely survives a tsunami and wrestles with her brush with death.

Matt Damon is solid as a reluctant psychic and Eastwood artfully brings the trio together for a predictable and satisfying ending.  But in this day and age it's hard to part with ten dollars to see a movie on the big screen unless it's a visual extravaganza.  Eastwood tries with the tsunami scene but this is a movie best left for the Red Box bin.
Posted by Rink's Ramblings at 11:15 PM