Fear and Loathing in St. George, then Vegas

Maybe that's what I needed for this trip was Carlos, Hunter, and an unlimited supply of illegal drugs and alcohol.  All I had was the Czarina and she's been on my case to blog about this trip because she took plenty of pictures.  She was chomping at the bit to drive the course on Friday.  We stayed at the Super 8 which was only a five block walk to the buses that lined up early in the morning for the start of the race. 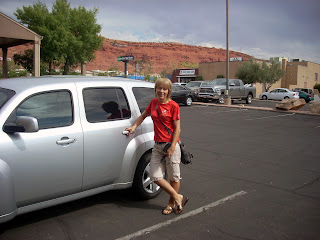 So we boogied all the way to the starting line.  It's changed a lot from the first time I ran the race in 1989.  They used to dump you off in the middle of the darkness of the desert with a handful of barrels with fires burning for those who couldn't stand the night chill.  Now there are flood lights everywhere and even a corral for the top runners to wait for the start.  In fact, most of the first mile is pretty well lit because the race starts a good 15 minutes before the dawn of light.  Of course in 1989 there were only about two thousand runners, now the entry list tops seven thousand. 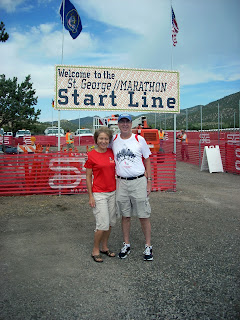 They've even put up flags along the starting corridor for every runner representing each state or nation at the race.  From what I could gather the only state not represented at St. George was Vermont.  It's a first class race put on by a great community. 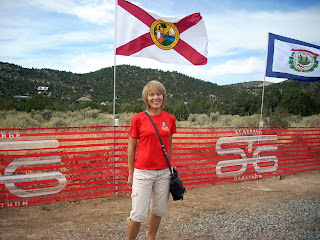 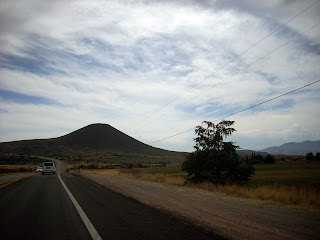 Seven miles into the race you encounter this.  Veyo, an extinct volcano, offers a pretty stiff climb that lasts for about three-quarters of a mile.  From Veyo the course continues a steady climb for about a mile and a half.  It's a real grind after the gentle downhills of the first seven miles.  If you can survive until the halfway point the real fun begins. 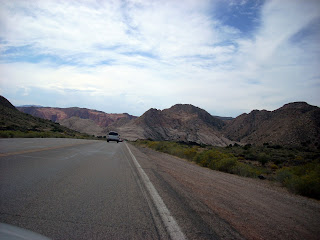 Just about at the 14 mile mark the bottom simply falls out.  Just looking at this picture you get no sense of how downhill it truly is but take this into account.  In 1989 I was running 6:35 pace up until this point when I put down a 5:38 mile over this section.  Even in 2010 I went from a 9:30 mile to an 8:05 as you enter stunning Snow Canyon. 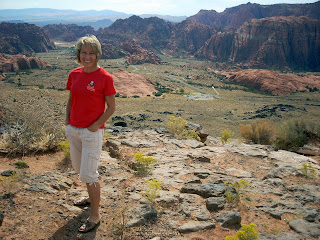 Snow Canyon is a delight to see as you go from mile 15 to mile 17.  It's a nice distraction as you begin to suffer from the toil of running 26.2 miles.  Even the Czarina, who usually doesn't notice a thing during her races, admitted to admiring the beauty of this gorgeous spot in Utah. 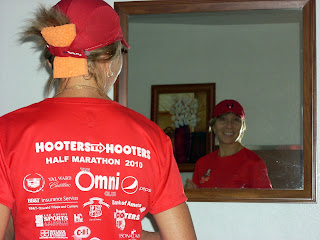 The Czarina wanted me to share with you the secret of her St. George success.  It was her strategic placing of a wet sponge in her cap the helped ward off the unusually warm conditions that the runners had to endure.  She bought a sponge for me but I declined to use one.  We all know how I ran.  Enough said. 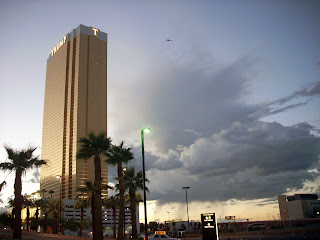 The best part of our adventure was Las Vegas.  We stayed at the Trump Tower.  The room was luxurious at a very reasonable price.  The only thing missing from the property is a casino, which is probably a good thing for the Czarina and myself given our luck at the slots and blackjack. 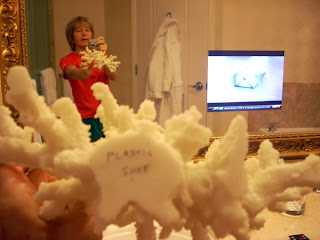 The Czarina loves checking out all the goodies in a room.  This phony piece of coral caught her eye and then she found what was written on the bottom.  Also in this picture is her other favorite from our stay at Trump.  No, it's not the robe on the hanger, but the television built into the mirror.  She loved that thing.  She's especially fond any hand or body lotion that the hotels put out.  She's gathered quite a collection over the year. 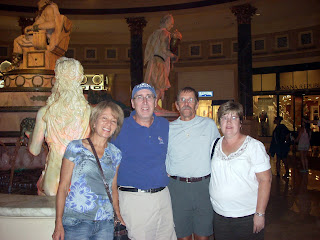 It's not the best picture but certainly the highlight of the entire trip.  Craig and Irene Davidson took the time to catch up to us at Caesar's Palace for a quick visit.  Craig was the whole reason for going to St. George in the first place as he ran his 200th marathon.  I miss talking to Craig on a regular basis.  The 16 mile trips on Saturday around Mummy Mountain were always a great way to spend a couple of hours conversing about the week's events with Craig.  He's promising to run marathon number 300 in another 14 years or so.  I'll try and be there, but this time I think I'll just watch.
Posted by Rink's Ramblings at 10:31 PM