I had planned to post this last Monday but I was waiting for pictures from my wife which never arrived... so you'll just have to imagine some of this. 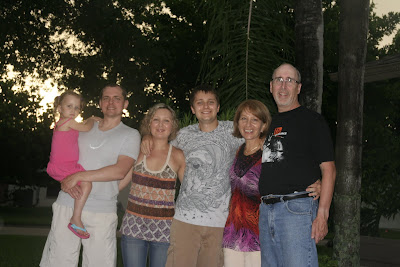 When I finally found gainful employment last month it was agreed that our Eastern European extension of our family should visit Fort Myers.  We figured Masha at 46 months would be just old enough to appreciate some of the things Florida has to offer plus her mother Natasha was in need of a get away.

The Dorofeev's visit will last the better part of three weeks.  It was decided that I would leave Sacramento (just three weeks into my new job) for the 4th of July weekend.  I caught a Red eye Wednesday and arrived Thursday morning in Fort Myers.  Part of the Czarina's grand plan included an early morning road race in Naples on the 4th.  Constant readers will remember last year's intrepid adventure to Clearwater for a late night 5K in a sauna.

When thunderstorms rolled through Fort Myers Saturday afternoon dropping temperatures about 15 degrees I proposed that we skip the Sunday morning race in favor of a Saturday evening showdown at a local high school track.  Vlad agreed to the proposition but then tried to beg off because of Friday's day long trek to Tampa and Busch Gardens.  I pointed out that I had put in a seven mile run plus pushed Masha's stroller five miles on an evening hike to the nature preserve that same day. 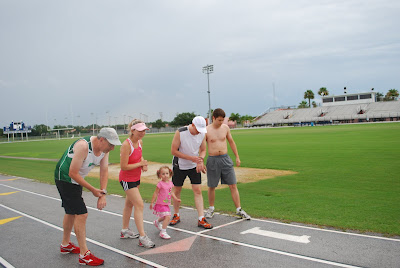 This year's family race featured a different line up.  Joining Vlad at the starting line were step-daughter Natasha and step-son Andrei who had also flown in from California for a week of fun.  The Czarina decided to stay on the sideline as race photographer and overseer of a most unhappy Masha. 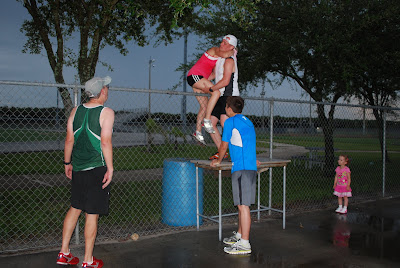 After scaling the fence at the locked Estero High School track and a short warm up we toed the line for this 5K showdown.  Andrei jetted out to an early lead while Vlad took his time slowly reeling in his ambitious brother-in-law after about three laps.  I was off the back with no hope of running down Vlad.  My only hope was that Andrei would run out of steam after two miles and I could reel him in.

Meantime Masha was screaming for mama every time she rounded the track.  She was a little confused as to why Natasha wouldn't stop to attend to her urgent needs.  Natasha says she wanted to quit after two miles but kept plugging away because she didn't want to read about it in this blog.

When it all ended Vladik whooped my ass by half a lap.  Andrei, who at one point was 150 meters ahead of me finished about 70 meters in front my late charge.  Vladik's time was around 22:15.  The Czarina miscounted the laps and he ended up running one extra while Andrei and I waited for him at the finish line.  Andrei clocked in at about 22:55 and I finished in 23:09.  I actually was happy with the time considering I hadn't attempted anything fast in more than two months.

Natasha was on cruise control in the humid air and finished just a hair over 28 minutes, a near two minute improvement over her 5K race last year in Riga.  The Czarina is insisting that a longer race be run before I had back to Sacramento, something closer to the 12 kilometer distance at which I mastered Vlad last year.  Quite honestly, while I'm in better shape than I was a year ago, so is Vlad and I suspect he's learned his lesson.  Easy and steady works a lot better than jetting off and burning out. 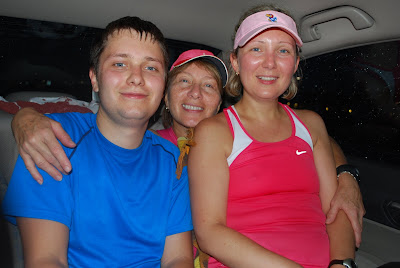 Posted by Rink's Ramblings at 5:06 PM