The last time I saw Neil Young in concert was at the American debut of "Greendale."  Neil's epic pro-environment/anti-media opus caught me off guard but it is a concert memory that I will always carry with me.  It was just another change up from the master of musical change up. 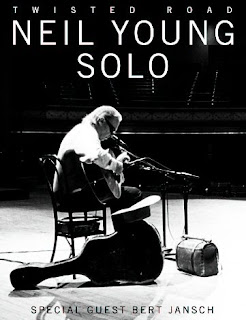 Neil's latest tour of smaller venues called "Twisted Road" has touched off a firestorm of criticism from so-called Neil fans.  They've bitched about everything from the ticket prices to the fact that this is a solo show with Neil shredding through some classics on just his electric guitar.  Even the song selection has come in for some criticism.

Neil played in Davis Thursday night, a suburb of Sacramento.  Since I work nights and I'm new on the job catching the show was out of the question.  But Neil also booked a show Saturday night in Reno, a mere two hour haul from my front door.

I debated about making the trip.  I got up really early Saturday for the road race and worried about the late night trip home.  I also wasn't sure about plunking down the 100 dollars or so for a ticket.  Most of all I was worried that I would be disappointed.  The stuff I had been reading on the web gave me pause.  But with the Czarina's blessing I got behind the wheel and made the trip over the Sierra's to Reno.

I started hanging out in front of the theater inside the Grand Sierra Casino around 7 p.m. hoping to scalp a ticket.  A half dozen of us stood around waiting hoping to score some tickets.  One guy was bitching up a storm about the prices which I thought was crap.  As much as music artists now have their work stolen because of the Internet I don't begrudge higher ticket prices, especially for a small venue.  I was beginning to worry that nothing would come my way when a young couple walked up and asked me if I wanted a ticket, they had an extra.  I paid 110 dollars for a 115 dollar ticket.  I then proceeded to the black jack table where I won 55 dollars in 15 minutes.  Score!

It was then time to head to the theater and I was blown away.  The place held no more than 3,000 seats.  I was no more than 60 feet from the front of the stage, almost dead center.  Bert Jansch opened with a 45 minute set.  He's not much of a vocalist but his guitar playing was amazing.

Neil hit the stage at 9:15 p.m. and took the place by storm.  He opened with his classic, "My My, Hey, Hey," and never let his foot up off the pedal.  The mix of hits, rare gems, and new songs was mind blowing.  To hear an unreleased classic like "Hitchhiker" was worth the price of admission alone.  Better still was just the whole atmosphere.  One of guys sitting next to me described it best.  It was like sitting with Neil Young in your living room and Neil putting on a private show for you.  News songs like "Leia", "Walk with Me", and "You Never Call", are real gems.

Neil had a stumble when he started "Helpless" with the wrong harmonica and he made a joke.  The whole evening was priceless and for those who don't get this current tour simply don't get Neil Young.
Reno marked my Neil show number eight including a couple of Crosby, Stills, Nash, and Young concerts, the out there "Trans"/"Flaming Pinks" Tour, and of course Horde stint with Crazy Horse which up until tonight was my favorite Neil concert ever. Below is "You Never Call", Neil's touching tribute to his long time collaborator L.A. Johnson who died earlier this year.  The lyrics are priceless.

Posted by Rink's Ramblings at 2:20 AM