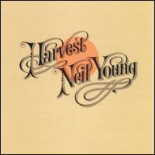 A little more than 38 years ago Neil Young released the album that propelled him to solo super stardom.  "Harvest" featured Neil's only #1 hit, a little ditty called "Heart of Gold."  What made this album "different" was the slick pedal steel played by Ben Keith on many of the albums great tunes.  He passed away today at age 73.  Keith's playing added an unmistakable touch to Neil's music.

I was lucky enough to see Ben Keith play with Neil on tour in 2000 in Milwaukee.  One of the indelible images from that night was Ben rocking out with Neil on a savage version of Bob Dylan's classic, "All Along the Watchtower."  I also saw Ben play Grandpa Green during Neil's debut of his epic environmental/media rip called "Greendale."

I'm writing about Ben because he's one of those great musicians that never gets a lot of due.  Much in the way Charlie Sexton's playing makes Bob Dylan's music that much better, Ben did the same for Neil.
Posted by Rink's Ramblings at 11:09 PM