I started thinking about what led me to television news.  So this is the first entry of what will be a series of my life and times in television, a career spanning more than 30 years so far.

I was unusual in that as a child I liked watching the evening news, Walter Cronkite in particular.  The bug really bit me hard in the 6th grade when our teacher, Milton Pippenger, would have students record a short newscast into a tape recorder before school started.  I became addicted to it.

About the same time I developed an obsession for the CBS Morning News.  I had fallen in love with Hughes Rudd.  He was a droll Texan who mixed his acerbic humor into his newscast.  It got to the point where I would actually get up at 7 a.m. to watch the entire hour before heading off to school.  Rudd was almost always joined by Bruce Morton, a great reporter, who would offer the latest out of Washington D.C., and a comic posing as a sportscaster named Ray Gandolf. 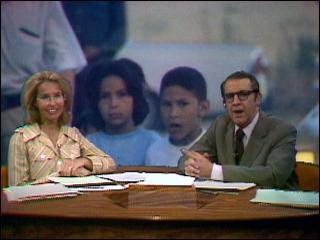 Rudd was a great writer.  Only the legendary David Brinkley showed a sharper wit and pointed copy that would nail you between the eyes.  Unfortunately I didn't discover Brinkley until I was a working journalist.

The news bug didn't really take hold until it occurred to me that I couldn't face the prospect of eight years of college if I majored in political science.  A degree in Poly Sci would mean getting a PhD and I really hated school.  The only that I loved as much as politics was sports and since I wasn't going to be the next Jim Ryun I saw journalism as a potential career.  Newspapers did little for me.  They seemed pretentious and I loved to talk so radio and television made more sense.

Just before the start of my freshman year at K.U. somebody suggested I approach the sportscaster at our local cable news station about helping him out.  I knew Rich Bailey having been interviewed him on a couple of occasions.  Rich said if I could do stats and make his depth chart boards, I could have the honor of sitting with him as he did games and if I was lucky, do a little color commentary.

I remember our first game just like it was yesterday.  We did a horrible junior high football game at Haskell pitting Central Junior High against West Junior High.  We recorded the game onto a black and white reel to reel video tape recorder with a bang box punching between the two cameras.  I was hooked.  By basketball season they actually started paying me ten dollars a game.  That could buy a lot of beer back in 1975!
Posted by Rink's Ramblings at 5:31 PM