In Praise of Cole 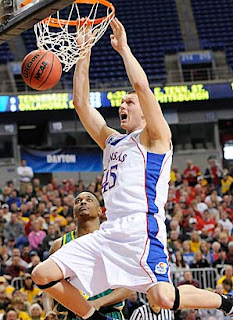 Cole Aldrich is going to the NBA.  I took something of a shot at the junior center in an earlier blog.  Cole didn't live up to my expectations this past season.  To hell with my expectations.  Cole will leave Kansas ranking as one of its all time great pivot men.  That's quite a list when you consider names like Wilt Chamberlain, Clyde Lovellette, and Walt Wesley.  In fact Cole is the best center to play for the Jayhawks since Wesley.  I don't consider Danny Manning or Dave Robisch centers!

He will leave Kansas as one of my all time favorite players.  He dominated the middle and I will never forget the unexpected performance he put in against North Carolina and the Tarheels All-American big man Tyler Hansborough.  I regret that I never got to see him play in person.

Aldrich isn't the first Jayhawk center to leave school early.  Wilt Chamberlain left to join the Harlem Globetrotters for one year before going to the NBA.  The only other true center that I remember leaving KU early is Victor Mitchell.  That's one for the trivia buffs.  Victor never made it to the NBA.

Most Jayhawks who leave school early don't have much of an impact in the NBA.  The late Norm Cook, a first round pick of the Boston Celtics was a bust.  But then there's another Celtic first rounder, Paul Pierce, another all time Jayhawk great who has enjoyed a stellar NBA career.  Other Jayhawks who have left school early in recent years have had mixed success at the next level.  Julian Wright really hasn't found his spot in New Orleans.  Darrel Arthur has had mixed success in Memphis and Mario Chalmers is still trying to fit in with Miami.