I giggle every time I hear Fred Norris play the stinger "Obama!" when talk turns to our new President on the Howard Stern Show. It's silly but it makes me laugh. But on Tuesday I was like a little kid when President Obama visited Fort Myers. We watched Air Force One fly into Southwest Florida International Airport from outside our offices. I forced my co-worker to walk with me a quarter mile down to the old airport entrance to see the motorcade and take a few pictures. We just missed getting there on time by 200 feet.

I watched most of his speech and town hall. I gave up on it when the goofball who works at McDonald's got up. That guy is a complete dingbat. He's a perfect fit for the new world of media.

As for our President, what a stark contrast from what we just endured for the last eight years. The cocksure cowboy who didn't have a clue is no longer roaming the halls of the White House. Instead, we have a deliberative man, who isn't afraid to admit that he may not have all of the answers. Change is here. I just hope that Barack Obama's predecessor hasn't left such a mess behind that our President can't help but fail.

It matters not for now. You'd think after 30 years or so in TV news that stuff like this wouldn't get me excited. I've been part of covering more than a half dozen Presidential visits and covered two national political conventions. But I wasn't about to miss the man's return trip to the airport. I got my partner in crime to camp out with me on a side road to get some video and pictures of the motorcade. We got checked out a couple of times. First a sheriff's deputy wanted to know what we were up to and then a Florida Highway Patrolman stopped to warn us that the Secret Service was heavily armed and that we should move our vehicle. I wanted to laugh but we complied. 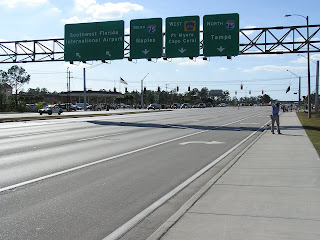 The moment came about 10 minutes later and I started taking pictures. I stopped to wave like a complete dork as his limo rolled by, even with the tinted glass, you could see the outline of his figure in the backseat. We headed back to the office and I got one decent shot of the motorcade. The video will be put to good use at work.

Here's hoping to stimulus. I hope that six months to a year from now we can all smile knowingly and see how a deliberate approach to our nation's affair beats six-shooters ablazin'.
Posted by Rink's Ramblings at 5:06 PM