Dope, not that kind of dope. The kind you shoot in your ass or the kind your rub on your skin as a cream or that little drop you put under your tongue. I'm talking Marion Jones, Alex Rodriguez, Ben Johnson, get you pumped up, juiced up, shriveled up (guess Marion didn't have to worry about that side-effect) kind of doping that is so prevalent in sports.

Alex Rodriguez is a great baseball player, steroids or not. So was Barry Bonds. Even Marion Jones was a budding superstar in track and field before deciding to turn to chemically enhanced running. What is the lesson here? The lesson is that by and large the best of the best in many sports use performance enhancing drugs. I think it's safe to say the number of baseball players who doped during the steroid era was well above the 25 percent mark. We all know that football players love the stuff. And unfortunately, the sport I love most, track and field, is infested with athletes who experiment with everything from steroids, to human growth hormones, to EPO. The lesson is that as hard as we might try to catch the cheats, or at least make a show of trying to catch them, the chemists are one step ahead of the tests. 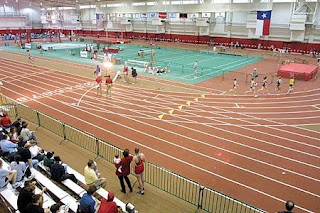 field get hammered for cheats. I wish I could explain the double standard. It's an issue that track and field has completely botched for the last quarter century. During that time track has seen its fan base whither and die on the vine.

The sport has a complete lack of understanding of public relations and marketing. USATF needs a David Stern type figure to shake it out of its doldrums. I fear that will never happen. It all comes down to dollars and they simply aren't there to fix much less save the sport. A new report out this week took an in-depth look at ails the sports. It goes back to what I've said for years. Track and field is a professional sport still tied to its amateur roots. In the quarter century that athletes have gotten paid for their efforts, the promoters, the coaches, and the athletes still act like it's amateur hour. There's nothing professional about track, except the drugs.
Posted by Rink's Ramblings at 4:41 PM