The high school cross country season involving Southwest Florida runners officially came to an end last weekend in North Carolina where a handful of runners participated in the Footlocker South Regional qualifier.  If you had told me four months ago that Stephy Ormsby would have stood alone as the best runner from Lee County, boy or girl, it would have left me dumbfounded.  Well, I'm dumbfounded.

Ormsby proved what hard work, eating right, sleeping right and purposeful cross training can do for an athlete.  Last spring Ormsby was a top flight 800 meter runner who certainly stood a chance at being a very good cross country runner.  But all that work over the summer made her a great cross country runner, certainly among dozen best in Lee County history.  It resulted in a surprising third place finish at State and leading her injury riddled team to a surprising fifth place finish. 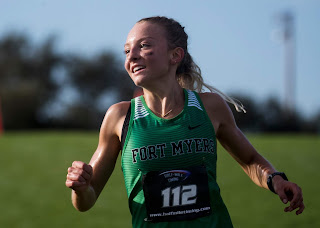 What's even more amazing is her run at Footlocker.  Ormsby got off to a horrible start going through the first mile back in 85th place.  She worked her way up to the field and managed a very respectable finish in 26th place.  A better start and Stephy could have been knocking on the door for a trip to nationals which is reserved for those who finish in the top ten.

The Fort Myers senior surprised me by running much better than my preseason number one, Canterbury junior Jessica Edwards.  Coming off a stellar track season, Edwards appeared poised to have an outstanding cross country season.  Don't get me wrong, Edwards ran great for most of the season finishing sixth at State and leading her team to the championships.  But Edwards appeared to hit a wall early in the season and while consistent throughout the year, didn't enjoy a big improvement one would expect as an athlete peaks at the end of the season.

The boys season played out about as I expected.  Fort Myers junior Liam Holston was clearly the best runner in the county until a late season illness threw his season into turmoil.  Liam's misfortune opened the door to sophomore teammate Colsen Palmer to shine.  Colsen's 11th place finish at State puts him in position to join Holston next year as a couple of contenders for top five finishes.  A healthy Holston at State could have put the Fort Myers boys in the top five, a couple of notches better than the sterling seventh place finish the Green Wave managed.

The surprise on the boy's side came from Ida Baker, as a team and with senior Franklin Caceres leading the Bulldogs.  Caceres raced fearlessly from the front all season.  His front running tactics caught up to him at State where he finished a disappointing 22nd but he laid the ground work for what could be a superb track season.

The shock on the boys side came from Estero.  By seasons end they were step for step right with Fort Myers.  Academic issues buried what should have been an amazing season of running by the Wildcats.  Estero will have some scores to settle this spring which promises some outstanding distance performances from a slew of athletes across the county.
Posted by Rink's Ramblings at 9:22 AM