2019 could be a historic year for high school middle distance running in Southwest Florida.  The main cast of characters from the spring of 2018 are all back and each athlete has a shot of accomplishments that will unfortunately fail to capture the kind of media attention from the area's sports loving public they deserve.

We all know the old refrain, good things come in threes.  That certainly sums up the trio of state champions that will compete for more titles and perhaps, perhaps some stop watch making history.
The 800 meter distance is the bulls eye for all three.

Ladies first and Evangelical Christian's Sierra Oliviera, who faces a tough task as she looks for her second State Class 1A 800 title.  The ECS junior captured her first State title as an 8th grader.  2017 saw her finish second at State in a personal best 2:15.51.  She'll be pushed in practice by junior teammate Elizabeth Wetmore who was a State qualifier last spring in the 800.

Oliviera will need that practice pressure as she chases the sophomore who goes to school just three miles away from ECS.  Cantebury sophomore Jessica Edwards beat Oliviera in capturing her first State title last spring.  Edwards ran 2:13.05, which ranks as one of the fastest 800 meters ever run by a Lee County girl. 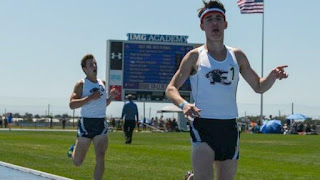 Brittenham aspires to join a select list of Florida preps to break 1:50 in the 800.  Certainly breaking 4:05 in the 1,600 has to be among his goals.  The future Gator showed improved endurance over last fall's cross country season.  The question is whether this middle distance talent will take a shot at a fast 3,200 during the course of his outdoor season.

The first outdoor meet of the season is six weeks away with the Ida Baker Indoor/Outdoor meet.  Don't look for any major fireworks until the Florida State Relays that stretches over two days the third weekend in March.  Until then, history will just have to wait.

Posted by Rink's Ramblings at 9:21 AM