My Marathon Journeys: The Kansas Relays 1975

In my ten plus years of blogging I haven't detailed the 20 plus marathons I have attempted in the course of my running career.  When I ran my first one in April 1975 there was still a great deal of mystique to grinding out 26.2 miles.  Break three hours was the seminal barrier for most runners in that era and was generally enough to get a begrudging nod of approval for top regional runners and even elites.

When I made the decision to run the K.U. Relays Marathon I was poorly trained.  My running career had been derailed by a couple bouts of serious illness in my senior year of high school.  My efforts to walk on the Kansas cross country team a little more than six weeks before coach Bob Timmons gave me the boot despite beating most of his scholarship freshmen in time trials.  Soon after I got a nasty case of strep throat and I was putting on my freshman 20.

I had never run more than 15 miles in training and only had a couple of ten mile road races under my built.  I hadn't raced a step since the previous spring and in the buildup to this particular race I was putting in 20 to 30 miles a week.  A lot of the runs were tempo efforts on the indoor track at Allen Field House.

I had only one thought on the morning of Saturday, April 19th when I lined up on Massachusetts Street in downtown Lawrence a hundred to 200 runners.  I wanted to finish instead Memorial Stadium and to do that I had to hit the stadium gates before the 3:15 mark.  I had no idea what I was in for on this sunny spring day..

Much to my surprise one of the running heroes of my youth showed up at the start, on a lark, looking to run his first marathon.  Kirk Duncan held the city's junior high record for the 880.  He had been a very good high school runner and went to Stanford going for pre-med.  He told me his plan was to run easy, seven minute mile pace and he promised to toe me along as he could.

The course was flat and gentle up to about six mile before we started a very hilly seven mile stretch that ended in Vinland, south of the city. At the turnaround, still feeling fresh, we made our way back to the hills and you could see the ravages of the race taking its toll on our fellow competitors. 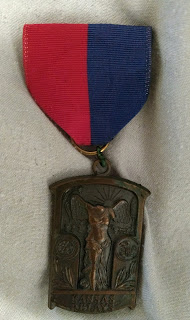 You always hit a wall, unless you are a super fit, and I hit mine at 18 miles.  I began to fade and Kirk said he was sorry and must be on his way.  He ended up running just over three hours.  I struggled really badly over the last three miles.  I was famished dreaming of a big, juicy steak.  I faced the daunting task of heading up the steepest part of Mount Oread that would lead me down the other side to the stadium and the finish over the last mile.

Despite my unrelenting fatigue and legs of lead I was aglow as I saw the gate still open as I rolled down Campanile Hill into the stadium.  I was the last runner granted entry to the finish line on the track clocking 3:14:15.  It is one of my most cherished finishers medals.

I hurt.  I ate everything in sight.  Then I painfully climbed the stairs to the stadium press box where I helped broadcast a full afternoon of track and field at the Kansas Relays.  I couldn't walk right for a couple of days.  But in the back of my mind I knew I would have to give the marathon another try at next year's Kansas Relays.
Posted by Rink's Ramblings at 6:32 PM