Television news operations underestimate the power of first rate local sports coverage in a major sports market.  The problem stems from consultants and their research that shows in the scheme of viewer desires, sports ranks near the bottom.  Well, duh.  It's a self fulfilling prophecy because far too many stations across the country give viewers half-assed local sports coverage.  Of course viewers are going to tell you it doesn't matter because you tell them it doesn't matter.

I'm writing this because WDAF is killing the last of its local sports legacy by letting Al Wallace and Jason Lamb go.  Less expensive reporters will fill their roles.  It's the final stake driven through the heart of an outstanding sports department that started when Frank Boal was let go more than nine years ago.  Few people are left that remember that Boal and others are a major reason for WDAF's ratings resurgence almost 40 years ago. 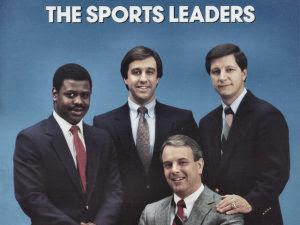 I joined WDAF in late October 1980.  Frank Boal came along about six month later and together along with Denny Trease and Gordon Docking we built a sports powerhouse.  Unlike a lot of news producers, I had a deep abiding love of sports.  WDAF at the time was the TV broadcast home of the Kansas City Royals, when the team was at the height of its popularity.

What I brought to Frank and news director Mike McDonald was something I had learned from the late great Steve Pascente, who was a major part of television sports in Phoenix for many years.  We had to own high school football.  It didn't take much to convince Boal that blanket coverage of high school football in the Kansas City metro area would bring us a lot of viewers.  Parents would come home after those Friday night lights and sample our 10 p.m. newscast if we covered as many games as possible.

WDAF created the dynamic high school football coverage format that is a major part of Kansas City television today.  Not only did we serve up a game of the week, we had a team of the week, a play of the week and our own weekly rankings of the top metro area prep teams.  I can't say enough about the hard work that Gordon Docking contributed to the success of this format.  Al Wallace was later a big part of it too.

The WDAF sports legacy was firmly led by Boal and was further cemented by later outstanding McDonald hires in the form of Wallace and Kansas City radio sports legend Kevin Keitzman.  WDAF owned local television sports.  That meant a heaping helping of Royals baseball, Chiefs football and Kansas City golf legend Tom Watson.  Then you add Kansas State, Missouri and K.U. sports coverage and you would think enough was enough.  But this team also bore down and covered high school sports beyond football.

I strongly believe our local approach to sports was an integral part of WDAF's ratings success.  When I joined the station WDAF was mired in last place in the local news game.  We were number one within two years thanks to a combination of the addition of a strong 6 p.m. newscast, better NBC programming, the Royals and our overall commitment to exceptional local sports coverage.

I firmly believe that commitment to sports by WDAF led to the creation of Metro Sports that blanketed the Kansas City sports for the better part of two decades.  The appetite is there.  Why else would Keitzman's WHB dominate the radio airwaves?  Why would blogs which cover Kansas basketball, Kansas State football, the Royals and the Chiefs enjoy such success?  Kansas City devours sports.

Now the powers that be at WDAF have decided that the experience that Wallace and Lamb brought to the table matters little to its viewers.  That the return on that investment in experience just isn't worth it.  It sends a signal to its viewers that sports matters little when I would argue the opposite.  WDAF should own the Royals and the Chiefs and high school football.  Blogs, newspaper and radio can't give you the power that video with great experience reporting can deliver.

Wallace's departure marks the end of a lineage of great sports anchors that can be traced all the way back to KCTV's Bruce Rice.  You can also add KMBC's Len Dawson, Don Fortune and Dave Stewart along with KSHB's Jack Harry and of course Frank Boal to that great legacy.  The circle is now broken.  I wonder if anyone will ever pick up the pieces?
Posted by Rink's Ramblings at 11:06 AM