It's that time of year when I give my thoughts on the University of Kansas basketball team.  It took a few more games than usual to pull together a cohesive narrative about where this year's squad is headed.  I'll cut to the chase.  This year's team has more talent than last year's that rolled to the Final 4.  The qualifier in that statement is the eligibility of Silvio DeSousa.

This edition of the Kansas Jayhawks serves up enough talent to let head coach Bill Self play the kind of high-low basketball that he likes.  Even without DeSousa, Kansas has two outstanding post players in Doke Azubuike and newcomer Dedrick Lawson.  Lawson is the most skilled interior player at Kansas since Thomas Robinson.  He is the best passing big man in school history, he's kills it on the boards, can hit the three and defends.  Lawson appears to lack the kind of strength at the glass on the offensive end but I suspect he will improve in that area as the season rolls along. 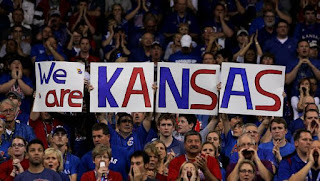 The team is at its best when Doke is on the floor.  It's not just the offense but his defensive presence cannot be underestimated.  That's why the team will need DeSousa.  He is the only interior defender that can match Doke's physicality.  I doubt the Silvio ever sees the floor this year.

The other "interior" players are more than serviceable.  Mitch Lightfoot is a ball of good energy even though he's over matched most of the time.  David McCormack is a year away from being a useful post player but if he progresses at all he could make up for the loss of DeSousa.  And then there is K.J. Lawson, Dedrick's older brother.  I don't know what to make of Lawson.  He seems to be a player in search of a game.

While the team offers guards aplenty, the long range talents of Svi Mykhailluik, Devonte Graham and Malik Newman are sorely missed.  Lagerald Vick has so far shown that he could be a terror from three point land.  But I worry that this early season hot streak is simply fools gold.  The freshman duo of Quinton Grimes and Devon Dotson can and must contribute from long range.  Marcus Garrett appears to have failed to work on his jump shooting so while his defense and driving ability will come in handy, he remains a major liability on the offensive end of the floor.

Yet the nugget, the true gem of this team is in the back court.  Devon Dotson is the best freshman guard I've seen on a Kansas team since Darnell Valentine.  He's better than Jacques Vaughn as a freshman and that's saying a lot.  Dotson drives the lane fearlessly like Frank Mason, he plays defense just a notch below Valentine and has shown a decent outside shot that will only get better.

Guard play wins at the college level.  Kansas will roll through the Big 12 but will be hard pressed to make it to the Final 4 this year unless Grimes and Dotson make major strides.  It's going to be an interesting team to watch because they play with a fearlessness that's surprising for such a young squad.
Posted by Rink's Ramblings at 7:48 PM