You never really know what to expect when you go to a Bob Dylan concert.  Tuesday October 23rd marked the 15th time I've seen the living legend and he delivered.  It was an amazing performance of classic songs that had been re-crafted as Dylan is want to do in unexpectedly brilliant ways.  From the opening number, the Academy Award winning "Things Have Changed," Bob was determined to reinvent himself. 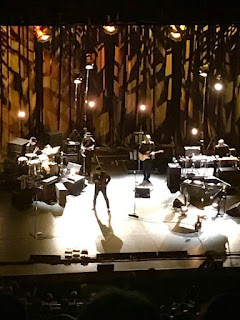 Dylan performed 18 songs that spanned the 50 plus years of his incredible career.  From "Don't Think Twice It's Alright" to the epic "Like A Rolling Stone," Dylan worked his magic in the reinvention of many classic songs.  Then Bob would deliver a newer gem like "Scarlet Town" just as it sounded on the album.  It's never boring.

There were so many highlights to the performance it's hard to pull up enough superlatives to enshrine the concert.  Dylan sounded great playing a grand piano, whereas before when I had seen him playing an electric piano, the sounded seemed muddled and lost in the mix.  His harmonica playing was sterling.  On the handful of times in the past when I had seen him play it his command of the instrument sounded disinterested.

The centerpiece of the show was the sparkling guitar play of Charlie Sexton.  The handful of times Charlie was let loose, such as on an epic "Love Sick," Sexton's playing crackled.  The last time I had seen Bob 12 years ago Charlie had left the band and his absence was considerable.  Sexton playing alongside Donnie Heron who holds down the pedal steel is reminiscent of the days when the great Larry Campbell played with Bob's band in the late 90's and early 2000's.

The backbone of the band is the steady bass play of Tony Garnier who has played alongside Dylan for nearly 30 years now on his Never Ending Tour.  Garnier was locked in tight with drummer George Receli who delivered a knockout solo during "Thunder on the Mountain."  This may well be Dylan's best ever ensemble since his days with The Band.

I went in the night full of apprehension.  The current recordings you can find on YouTube of this tour don't fully deliver the power of Dylan and his band.  At age 77 he doesn't appear ready to slow down.  The troubadour seems like he's ready to deliver another decade of his remarkable music.
Posted by Rink's Ramblings at 8:34 PM