It is rare in life when one can say they have enjoyed the opportunity to work with a living legend.  I was lucky enough to do it twice.  I worked from 1987 until 1990 with Bill Close.  He was a television icon in Phoenix, Arizona.  He was gruff, opinionated, hard but fair.  He was a great journalist. 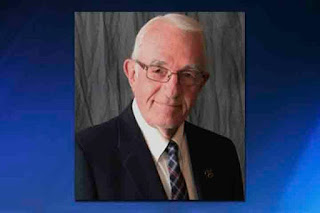 The second opportunity happened in 1983 and 84 during my short stint in Paducah, Kentucky as a news director.  Tom Butler was my boss.  He had been at WPSD for more than 20 years at that point.  He was the polar opposite of Bill.  Tom was smooth, warm, and doled out wisdom rather than force feeding you his considerable knowledge.

Tom passed away today after a rough ride health-wise the last few years. It's a big loss for Western Kentucky.  And it brings me back to a time while I dealt with a personal life fraught with turmoil, along side a man who tried to gently guide me through the challenges of being a news manager.

Tom Butler had created a bible for running his newsroom.  It was there in black and white, bound together in a massive book.  While I initially didn't agree with everything in that book, we both shared a love of crisp, sharp, television news writing.

During my tenure I slowly came to realize the deep sense of community that was ingrained in Tom's newsroom bible.  The things that had rubbed me the wrong way now began to make sense.  All the while, Tom offered his sage counsel, only when I sought it.  He never force fed me his beliefs about running a newsroom.

My favorite Tom moment came in the aftermath of a fierce winter storm that had left a thick layer of ice and snow across Paducah.  Tom had called me at sometime before 3 a.m. to warn me of the challenge he was facing getting to work.  I ended up putting on my running clothes and heading over to his house about a mile away to try and help push his huge car out of his driveway.  It wouldn't budge.  He waited at home for a tow truck that would never come while I ran to the station and due to the nature of the day, took his place on the air for the first and only time in my life where I "anchored" the news.

When I left the station a couple of months later, Tom's kindness and encouraging words helped make my departure a little less painful.  He was the gentlest soul that ever graced a newsroom.  I am so grateful that our paths crossed.
Posted by Rink's Ramblings at 10:48 AM