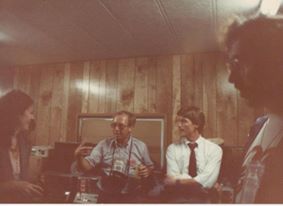 This photo is from another time and place in television news history.  It was August 1984 at the Democratic National Convention in San Francisco.  It comes from a golden era when stations traveled to big stories.

The man in the glasses was a great photojournalist, John Roach.  The man in the white shirt and tie is Phil Witt.  You can see me looming large on the right.  I'm writing this because Phil Witt announced that he will retire sometime in June.

It's the end of an era in Kansas City television news.  I say this because Phil is the last of the great trio of male news anchors who ruled over the TV news scene for more than 40 years.  I include Phil in the ranks of KMBC's Larry Moore and KCTV's Wendall Anschutz.  These three were above all reporters, great reporters.  They led their newsrooms, in different ways.

My first job in television news was at KMBC with Larry Moore looming large.  He was loud, brash, fun and a win at all costs kind of journalist.  A year later KCTV would promote weekend anchor Wendall Anschutz into its main anchor chair.  Wendall appeared to be a kinder, easier going type, than Larry.  Wendall was more Charles Osgood as opposed to Larry's, Shepard Smith, for those of you too young to remember them.  KMBC was a strong number one in the ratings with KCTV in second and WDAF a distant third.

Phil didn't miss a beat with co-anchor Cynthia Smith, weatherman Dan Henry, and sports director Frank Boal.  He never lost his love for reporting while sitting in the anchor chair.  And more importantly, he was a patient teacher and leader.  God knows how he put up with this hot headed producer.  Phil never lost his cool.  He just wanted to get the work done and get it done right.

Eventually Larry came back to Kansas City and WDAF lost its mind and let the Oprah franchise slip away and KMBC climbed back atop the ratings.  Yet, despite several ownership changes, Phil Witt remained a steady leader at the station along with long time news director Mike McDonald.  What made Phil unique is that he could co-anchor with anyone and make it work.  The ratings through the years prove that.

My favorite Phil memory came sometime in the mid-80's.  I was tired of all the attention we gave to high school sports stars.  I asked Phil, wouldn't it be great if we could highlight regular high school students who were outstanding in other areas, academics, as community leaders, etc;  Thus, Reaching 4 Excellence was born and Phil Witt made it a weekly standard.  And I still grin when I remember a Phil faux pas involving bowling pigs.  Don't ask.

Wendall Anschutz left the anchor desk in the 90's.  Cancer took his life in 2010.  Larry Moore stepped down in 2013 and that left Phil as the last man left who had sat at a Kansas City news desk as far back as the 70's.  He did it with grace... a simple grace that always held true to his Nebraska roots.
Posted by Rink's Ramblings at 6:55 PM