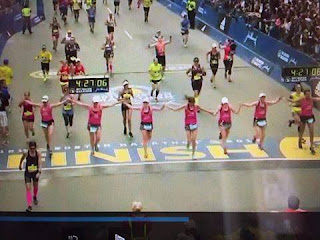 For 80 years or so, Boston drew a handful of elite athletes and a lot of very good local runners.  The first qualifying time didn't appear until 1970, a mere four hour standard.  The jogging boom eventually brought some serious qualifying standards by the end of the 70's.  I remember having to run a sub 2:50 marathon.  I didn't accomplish that until I was 30 years old.  Even then, I passed on the opportunity to run Boston.

By the time I ran the race in 1994 about ten thousand runners gathered for the mass start in Hopkinton.  A lot of my friends talked about running the 100th in 1996 and my only thought was who would want to deal with 20,000 runners in this cramped area.  I returned to run it again in 2003 with 17,000 other runners.  By this time facilities at the start had been improved and the race went off in two waves.  I ended up not running due to an injury.

I noticed in 2003 the large number of runners given entry thanks to ties to the race sponsors.  Few, if any, had qualified by time. Shortly after that came the deluge of charity runners.  They received invitations to run the prestigious race by raising money for a worthy cause.  That forced organizers to use a third wave at the start.  In the last four years, it started squeezing out runners who had qualified.

That's a big part of my beef.  Yeah, I'm old school and Boston to me should mean something.  Letting charity runners in at the expense of runners who ran a qualifying time is wrong.  It's the tail wagging the dog.  And the picture above is an example of why it's wrong.  I can only imagine having to that gaggle if they ran a large portion of the race together.

Running a Boston qualifier is hard.  It requires a lot of dedication.  Looking back, I took it for granted.  I never really stopped to think how lucky I was.  It's the best race I've ever experienced.   The thrill of running through the scream tunnel at Wellesley will stay with me forever.  Running up Heartbreak Hill was incredible.  The finish, gathering with my friends, sharing their racing adventure, it was heartwarming.  Even watching from the finish line for my wife to finish in 2003 was tremendous.

But money now rules at Boston.  The city still fills the streets to support the runners, even though the drama is now drawn out over more than six hours rather than four.  My words won't change the direction organizers have taken the race, nor should it.  But if you run Boston, respect it and those who are running it with you.