It sat staring at me for nearly two years.  It was an old book, torn and tattered, part of a little library that's part of my running store.  Mike Pemberton kept more than a couple of dozen books in the store.  Most of them are about training, a few running biographies, including Marty Liquori's "On The Run."  It pains me every time I see that book.  I had a copy of my own, autographed by Liquori back in 1980.  It disappeared a long time ago.  I suspect someone kept it after borrowing it from me. 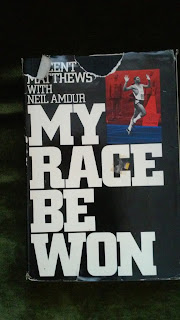 The sad book that stared at me was one that I would have never considered reading were it not for the fact that Mike had it sitting there and were it not for my boredom stemming from the slow days of summer that mark the running shoe business in Southwest Florida.  The book is called, "My Race Be Won."  It was written by Olympic 400 meter champion Vince Matthews.  Last week I finally gave in and started reading it.

Much to my surprise, it was a great read.  It's one of the better book about being a track and field athlete that I've ever read.  Matthews 40 plus years old autobiography taught me a very sorry lesson.  Little has changed in terms of race relations in the United States of America.

Matthews came of age as a track star when the sport was strictly amateur.  Any money an athlete made during that era was strictly under the table or by being clever when it came to asking for airfare and lodging.  He was a top flight high school quarter miler in the mid-60's but his academics limited his collegiate options.  In fact, it took him an extra semester of high school before he could graduate and enroll in a small, historically black college in North Carolina.

It's hard to think that a world class runner could emerge from a small black college.  But that was the world of track and field in the 1960's and 70's.  Matthews does a great job of dissecting the inherent racism that can cut both ways in society.  Even in a sport like track and field where it appears black athletes would have parity, it simply wasn't the case.  Let's face it, white distance runners get more ink and more shoe company dollars than black sprinters.  It was true in 1968 and it's still true for the most part in 2016.

Matthews' 1972 gold medal in Munich is a compelling a comeback as you can find in the world of track and field.  He jumped fences and barbed wire to train on a track.  He overcame terrible medical issues to compete.  He also overcame an indifferent United States Olympic Committee which refused to pay his way to compete at the 1972 Olympic Trials in Eugene.  They gave a big no to a man who ran on a world record setting 4 x 400 relay that won gold in 1968 at the Mexico City Games.

Matthews is an inspiration.  He is a renaissance man who allows us to go along for the ride.  His descriptions of the trips to Europe, the women, the gambling, the fight for the rights for African-Americans, it's all there.
Posted by Rink's Ramblings at 9:44 AM