No Country For Old Marathoners

I watched as much of the Boston Marathon on Monday as I could.  It stirred something deep within me.  I thought to myself, I could do that.  I could run a Boston qualifier.  It's not impossible. 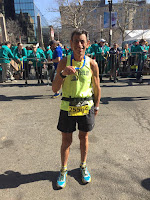 Just the Friday before, Richard Olitsky stopped by the store looking for words of encouragement before leaving town for what would be his 8th run at Boston.  He looked at me and asked, "When are you going to run another marathon?"

I chuckled at the question and responded, "I don't think that's going to happen."  I look back at what was and wonder why I would want to put myself through the hell that is marathon training.  Plus, what's the incentive of running a 3:55 marathon.  Actually it would probably have to be under 3:50 to get into the race.

I've run 20 marathons.  Of those 20 well more than half were under the Boston standard.  Yet, I've only run Boston once, back in 1994, before the field swelled to its now ridiculous size.

Then something came up.  My friend and old training partner Craig Davidson was running his 150th marathon in 2010 at St. George.  I had run St. George in 1997 when Craig ran his 100th marathon, so I broke my promise to myself.

The training was half-hearted.  I think I had one long run of more than 16 miles.  I thought I had done enough to run a Boston qualifier but I had been fooling myself.  St. George was a hot death march and I ran 3:56:47.  I thought that stopping at number 20 was fitting.

Still, the urge remains.  Fort Myers is a horrible place to train for a marathon.  You need hills to build the core strength to run a decent marathon and all we have are a couple of bridges.  Then there's the weather.  The great training weather starts in November and ends in April.  The good qualifying races are in December and January.  That means starting your hardcore training in August when the weather is absolutely miserable.

I don't know how Richard Olitsky does it.  He forces himself out the door at 5 a.m. to beat the heat.  He's nine years older than me and he can hammer workouts that I can't even imagine attempting.  Yet despite all the hard work, Richard was sitting in my store before his big race full of self doubt and as it turned out, for good reason.

Richard was in shape for a 4:10 effort on a flat Florida course with good weather.  Unfortunately he was facing the hills of Boston, warm weather, and a strong headwind.  Richard finished in 4:31 meaning he's got to run a qualifier sometime in the next six months if he wants to run Boston number 9.

Fort Myers isn't a great place for older runners striving to run a Boston qualifier.  To all of my friends over the age of 50 who do it.  My congratulations, it's an amazing feat.  I just can't imagine it.  I don't think I can do it.  But the temptation remains, tugging gently at my competitive spirit that's buried somewhere within me.
Posted by Rink's Ramblings at 10:41 AM