Nothing beats road racing in Southwest Florida in the winter, nothing.  The courses by and large are pancake flat and once the humidity gets sucked out into the Gulf of Mexico the weather is awesome.  Yet for all of the top notch winter 5K's and half marathons, the area lacks a first rate marathon. 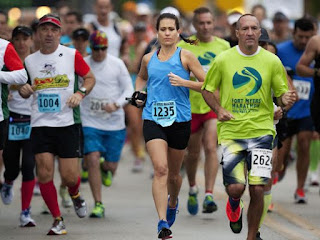 A local for-profit company called Eident Racing has been trying to make a go of it with marathons in Fort Myers and Naples but the results over the last three years have been at best, dicey.  The courses by and large are lousy and course management has been spotty at best.  Plus in the case of the Fort Myers event, November is not a good time of the year to try and pull off a marathon.

Eident first tried running the race in 2013 on Fort Myers Beach.  A lot of runners assumed the race would include a run along the wonderful stretch of Estero Boulevard that runs by the beach.  Unfortunately, that wasn't the case.  The out and back course took runners over the Mantanzas Pass Bridge to a mess of a maze 12 plus miles away in Lakes Park.  Runners got lost and the weather wasn't the best.

The 2014 edition moved to downtown Fort Myers.  Eident made the decision that three trips over the bridges spanning the Caloosahatchee River would make for a good marathon.  Plus, poor course management caused several runners to run a mile or so more than the standard 26.2.  It was an unmitigated disaster.

This year cane with slight improvements in the course and better course management, but
the weather turned the event into a death march.  The marathon and half marathon runners had to endure temperatures in the mid-80's plus humidity levels that were off the chart.  Eident is lucky that a runner didn't drop dead from heat stroke.

Make no mistake, planning and holding a marathon is no small task.  It is disaster waiting to happen.  But two things need to happen to fix the Fort Myers race.  The marathon needs to be moved to December or January.  November weather is too unpredictable to hold a race of this distance.  The course needs to include only one bridge.  No one wants to go over the bridges three time, they come to Fort Myers hoping to take advantage of a flat, fast course.

That's way the Best Damn Race in Cape Coral is the only viable marathon option for now in Southwest Florida.  Last year's inaugural race went off without a hitch.  The only drawback on the course is it is two loops.  That makes for a boring marathon.  But I'll take boring over bridges.
Posted by Rink's Ramblings at 10:51 AM