The 2015-16 road racing season has been underway for a couple of weeks in Southwest Florida.  The weather really doesn't start to cooperate until November and it stays pretty good until the beginning of March.  Now, there are a ton of races in Lee County and Collier County, but if you want to run in quality events, it's best to stick to races put on by the Fort Myers Track Club and Gulf Coast Runners.  The other "for profit" groups that hold races, simply don't measure up, with one exception.

I can't speak for the races in Collier County because I have only run a handful of races there.  This missive will focus on the races on the calendar up through the end of 2015.  We've already had a handful of good races like the FISH 10K on Sanibel Island.  It is a race that has grown in popularity by leaps and bounds.  It's attractive for two reasons, it's a great reason to get out to Sanibel, plus it's one of the few 10K's in the area.  The only drawback is the weather.  It can be warm and muggy.

There was also a night race in downtown Fort Myers called Cops N' Joggers along with a scenic 5K and 15K called Race the Roof.  However the weather at any of the aforementioned faces can be humid at best, crisp and cool usually doesn't arrive until November.

If you like hitting tackling a bridge then the Veteran's Day race over the Midpoint Bridge is the one for you.  I like it because it's a night race.  That usually means good weather.  It's held on Veteran's Day and it draws big crowds.

From November 11 you have to wait until November 26 for the traditional Thanksgiving Day race, The Turkey Trot.  There are now a proliferation of Thanksgiving Day races across the area.  This one is the oldest and is a ton of fun.  I do have one complaint and that's the start.  The street where it starts is too narrow.  It would be an easy fix if the start were moved a block over to Del Prado or move it back to the old starting line on SE 6th. 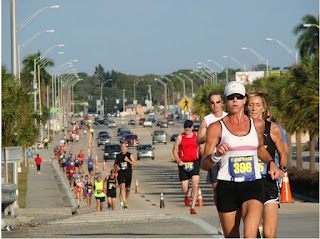 The final race in 2015 is the River Run, held in downtown Fort Myers, on Saturday December 5th.  This too is one of the rare 10K races and it takes you up and over two bridges.  This used to be a big draw but attendance has fallen in recent years.  I can't say enough about what a great test this race is and the weather is usually pretty good.

I want to talk about two other races that are put on by for profit companies.  The first is the Fort Myers Marathon.  Besides the 26.2 on November 8 there is a half marathon and 5 mile race.  Stay away.  The first two editions of this race have been terrible.  First of all, the course is not very good.  Second, the lack of volunteers make it easy to get lost on the course and in some cases, a lack of water stations.  Oh and as for an awards ceremony, forget about it.  Maybe Eident Racing has its act together this year, but I wouldn't count on it.

The other for profit race is December 13th's Best Damn Race in Cape Coral.  This is a marathon, half marathon plus a 5K.  Last year was its first and all of the reviews were positive.  The course is flat.  The only drawback is the marathon is a double loop.  Given the lack of quality marathons in our area this one is definitely one to consider if you're looking to run a decent time.

Posted by Rink's Ramblings at 7:47 AM