One of the things I regret is the fact that I didn't routinely keep a running log until 1985.  That's when the late, great Tom Dowling insisted that keeping one was an important part of a training program.  Tom started coaching me in December of 1985 and would routinely check my log and write observations and words of encouragement in it. 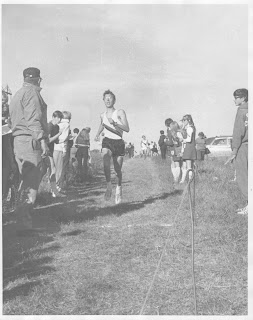 Through high school and college I never kept track of my mileage or workouts.  I kept a list of my in season high school races and much to my regret, did not keep a list of the dozens of summer races I ran which included road races and track meets.  I only remember a handful of those summer races.  Remarkably, I can remember something about every race I ever ran for Lawrence High.  I guess they had more meaning than the out of season races.

Over the last month or so I started digging through all of my logs that I've kept over the last 30 years to create a database of all the races I ran.  I don't know why I'm doing it, except it's interesting to come across races that I have absolutely no memories of running.  I'm not sure I was a prolific racer.  Tom Dowling was not a big believer of racing a lot.  Over the 30 years I ran as many as 17 races in a year and as few as zero, which happened in 2005, a year in which I was dealing with a serious health issue which left me wondering if I would ever race again.

The one thing that stood out to me was the fact that the last time I broke 40 minutes for a 10000 meter road race was in 2000.  The 15th anniversary of that race is coming up in a couple of weeks.  It was in Fargo, North Dakota at a hospital charity race named for baseball great Roger Maris.  I wasn't in very good shape and was pleased that I ran 39:34, but if you would have told me that this would be the last time under 40 I would have laughed.

The following year I was training for a marathon and couldn't get below that 40 minute barrier.  I was 45 years old and still running 5K's in the low 19's which would translate to being able to break 40 but alas, it wasn't to be.  It was downhill from there.

I can remember a couple of years later it was a struggle to try and break 20 minutes.  A number of leg injuries, the illness I suffered and age was taking its toll.  But I think the biggest problem was my training.  I no longer had the desire to do long runs.  In my 30's the long run was a 21 mile Sunday ritual.  By my 40's it was a 16 mile ritual.  After my illness, concerns about dehydration made runs of more than two hours a dicey proposition.

Even if I were to somehow reinvigorate my training regiment, lose 20 pounds and devote myself to breaking 40 as a goal, I know that ship has sailed.  I think I could still run 5 kilometers under 7 minute pace but I have to ask myself, is it worth the work?  I'm still reasonably competitive in my age group.  Yet being a 60 year old cock of the block holds to luster for me.

I train now because I still enjoy running.  I race because I love the feeling of effort that racing brings.  Times mean little anymore.  The test of self means much more.  And I'm thankful that I have those logs that Tom Dowling insisted that I keep to remind me of those tests.
Posted by Rink's Ramblings at 8:49 PM