It's Not Dark Yet

"I was born here and I'll die here, against my will."
Bob Dylan

Bob Timmons died Tuesday.  He was one of four men that coached me as a runner.  Everyone that ever knew him or competed for him knew him as "Timmie."  I never got around to having the privilege of competing for him because he never gave me a chance.  For a long time I carried that fact around like a cancer.  I disliked him for it and for some other petty reasons.

I was a better than average high school distance runner.  My senior year in high school was a disaster thanks to a lingering illness.  I decided I would walk on at the University of Kansas in the summer of 1974 and promptly did little of the work required to be part of a top flight college cross country team.

I remember the first time I crawled into the back of his pickup truck with a dozen or so other runners, some of them destined by to All-Americans, including Olympic silver medalist Jim Ryun.  He drove us northwest of Lawrence about 10 miles, unloaded us and told us to run back to Memorial Stadium.  Every workout was a humbling experience.  Many were downright torturous.

The day came about a couple of months into the season when we did repeat 2 miles.  I had been warned by the other runners, never crawl back into the pickup during a workout.  That particular day I had been suffering from stomach problems.  I quit halfway and sought refuge in the truck.

The next day in the bowels of Memorial Stadium Timmie pulled me aside and bluntly told me I wasn't cutting it.  I pleaded with him.  I had been beating half of his scholarship freshmen in time trials.  I was technically the 10th or 11th man on a 20 plus man squad. I cried like a baby when he told me, "Come back when you get in shape."

It was one of the toughest things I've ever experienced in my life, certainly the toughest at that point at age 18. Looking back now, it was probably even tougher for Coach Timmons.  It's sad to look at the state of KU's distance program because my sorry self of 1974 would be good enough to be a member of their varsity cross country team now. 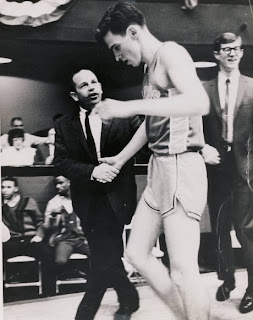 During the Timmons era at Kansas, the program prospered until the last few years of his tenure. His predecessor, Bill Easton, had turned Kansas into a national power. Easton lost his job, due in part to Bob Timmons and a high school phenom he had coached at Wichita East, Jim Ryun.

Timmon's former athlete had decided to attend Oregon State. Timmons, who had become Easton's assistant during Ryun's senior year in high school, was handed KU's head job after Easton was fired for some minor transgression. Suddenly Ryun was Kansas bound and the rest is history.

Ryun had a wonderful career at Kansas. The program continued to flourish for the next 15 years with the Jayhawks winning a handful national titles in track and field. They were unbeatable in the old Big 8. But Timmons reign had one glaring weakness. There were no more Jim Ryun's.

By and large distance runners who ran for Kansas never lived up to the potential they had shown in high school. A few did, Kent McDonald, one of my old training partners, was an All-American and finished second at the old AAU nationals one year. Bill Lundberg was another standout who went on to coach. I could name three or four others but the point is, none of his distance runners at Kansas, ever won a national title, or made an Olympic team, except for Ryun.

Timmons had made his name as a great high school swim coach and later on as a track and field coach. He put his swim coach philosophy to use in track and created two legendary high school milers, Ryun and Archie San Romani, Junior. But his workout regiment was brutal. I experienced it first hand. A few runners, like McDonald, learned to coast through some of the workouts, in order to stay fresh and competitive. But very few did and many simply burned out.

For a long time I despised Bob Timmons. I blamed him harshly for KU's fading fortunes in track and field at the start of the 1980's. He had faults, but at heart he was and is a good and caring man. And as I grew older, more sober, I began to realize that my hatred was a waste of time. I began to value the experience that I had with Coach Timmons and became thankful for that eventful day when he kicked me off the team.

I became so grateful in fact that I produced a documentary about Timmons and his prized prodigy Jim Ryun in 1996. Most people probably assumed I did it as a tribute to Ryun,

a world record holder in the mile and an Olympic silver medalist. But the real reason I did it was to give Timmons the credit he deserved for putting Jim on the path to greatness. It was my way of making amends to the man, even though he never knew (at least I don't think he knew) that I had harbored such ill will for him for the better part of a decade.

So I was crestfallen when Timmie passed.  He was a great man.  He had was a man with few faults.  He was a man who simply wanted to give those around him the passion and strength to succeed.
Posted by Rink's Ramblings at 7:24 PM