Close But No Cigar

It was like watching a train wreck unfold in slow motion.  Molly Huddle seemed to have a bronze medal just for the taking.  A final sprint in over the last 50 meters and she would join an illustrious group of American distance runners to medal at 10000 meters at a major championship.  Behind Huddle, Emily Enfield was charging hard, but surely it was too little too late.  And then it happened, something I had seen countless high school runners and even adult runners doing in races and workouts, Huddle eased up and failed to race to the finish line. 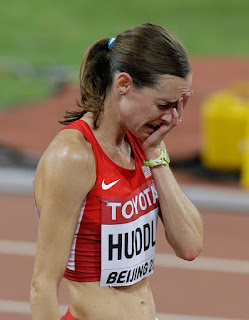 The Notre Dame grad threw her hands up a step to the finish assuming the bronze was hers as Enfield slipped by.  It was a jaw dropping experience.  Enfield was the third wheel of an amazing duo of Huddle and Olympic bronze medalist Shalane Flanaghan.  Even the pros can screw it up.  And unfortunately, that's the story the media is focusing on.

The bigger story is the fact that three American women, took three of the top six places at the 2015 World Championships.  For those of you keeping track, our American trio kicked some major Ethiopian and Kenyan butt.  If you were scoring this like a cross country meet, the USA came out on top.

The big story is that American distance running is back.  Enfield, Huddle, Galen Rupp, Evan Jager, Jenny Simpson, Shannon Rowburry, Matt Centrowitz, Brenda Martinez and Leo Manzano are the real deal.  The USA is in the mix and isn't it grand.
Posted by Rink's Ramblings at 8:21 PM