Anyway you slice it, the 2015 World Championships was an unmitigated disaster for United States track and field.  We took six gold medals, the same number that we won in Moscow in 2013, but the overall medal count fell by seven.

What made this so cringe worthy were the lack of medals in events the U.S.A. usually dominates.  No medals in the men's 400 meter hurdles, no medals in the women's 100 meter hurdles, no medals in the men's and women's 200 meters, oh and yes, another botched men's 4 X 100 relay.  Sunday's men's 1500 final summed up the American effort.  Leo Manzano, Robbie Andrews and Matt Centrowitz all made the finals, an amazing feat.  Yet none of them finished anywhere near the top three.  Centrowitz was perfectly position with 300 to go but lacked his usual giddy-up fading to 8th.

Kenya and Jamaica dominated these championships.  The other obvious headline was doping.  Some of the performances screamed performance enhancement.  I'll offer two examples.  In the women's 1500 Ethiopia's Genzebe Dibaba ran the final 800 meters in the race under 1:57.  That was more than a full second faster than the winning time in the open 800.  Then in the women's 5000 another Ethiopian Almaz Anaya cranked the final 3000 meters in a near world record 8:19.

The lone American bright spot was Allyson Felix, who won the women's 400 and ran a stunning 47.7 in the 4 X 400 relay which should have resulted in another gold medal but only ended with silver.  Felix picked up another silver medal in the women's 4 X 100 relay to boot. 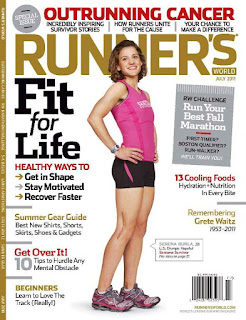 My favorite moment came in the women's marathon.  American Serena Burla, a cancer survivor, had allowed herself to be gapped by some 300 meters very early in the race.  Burla worked from about 5K to 15K to close that staggering distance to reunite with the lead pack.  She hung in with the group until the real racing began at 30K and still managed a respectable 10th place finish.

Track and field is in a world of hurt.  The rampant drug abuse is on a scale seen during Lance Armstrong's hey day on the Tour de France.  The IAAF appears as corrupt and ignorant as their soccer counterparts at FIFA.

As for U.S.A. track and field, one can only hope for better days in Rio at next year's 2016 Olympics.  Oh to be in Eugene next summer for the second best track meet in the world, the U.S. Olympic Track and Field Trials.
Posted by Rink's Ramblings at 11:13 AM