The University of Kansas enjoyed the status of being a national power in track and field for about 30 years.  The Jayhawks were a force in the 50's, 60's and 70's.  It all started falling apart for several reasons. Bob Timmons refused to recruit foreign athletes. Timmons also lost his best recruiters to other schools, men like Thad Talley, Stan Narewski and Gary Pepin, who turned Nebraska into a national track and field power. The final blow was Title 9. Leveling the playing field for women came at the expense of men's track and field programs across the nation. I'm not complaining about it, it's just a fact.

So K.U., which was as good as Oregon, or Florida, or Texas A&M or L.S.U. or any top tier program, started a very slow fade in the 70's culminating with Timmon's departure in the 80's.  The program had a few bright spots in the 80's and 90's under Gary Schwartz with the likes of Scott Huffman, Pat Manson, Michael Cox, Kristi Kloster and Candace Mason, sprinkled through the years, but both the men's and women's program were moribund.  The women's program was particularly anemic and there was a lot of speculation over the last half dozen years how long Stanley Redwine, the man brought in to replace Schwartz, could keep his job.

But then something strange happened. Redwine managed to recruit some good sprinters and a few good field event athletes and the program started to gain some traction. The biggest addition came 3 years ago when Diamond Dixon signed on to become a Jayhawk. Dixon was like icing to the cake.

Last year the women's team stumbled its way to a 4th place finish at outdoor nationals but I honestly didn't think much of it, even though the team had been slotted for the podium. At the NCAA meet if you have a handful of high placers you can crawl into the top 5. But Dixon made me take notice. Especially when she made the U.S. Olympic team and won a gold medal as part of the U.S.A.'s winning 4 x 400 relay team.

Suddenly, I realized that Redwine's team was a force to be reckoned with, boasting a well rounded squad. A 2nd place finish at the NCAA indoor nationals was refreshing. But winning the outdoor title over Oregon, at historic Hayward Field was breathtaking. And they did it without Dixon making it to the finals in the 400. If you had told me that was possible, I would have laughed. 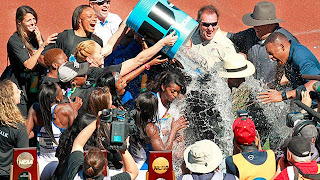 Yet here was Andrea Geubelle scoring in the long jump and triple jump. Paris Daniels scoring in the 200 and helping 2 relays squads earn All-American status along with Dixon running on both squads. Mix in a good Russian pole vaulter Natalia Bartnovskaya, three pretty good throwers and a national champion in heptathlete Lindsay Vollmer and Rock Chalk Jayhawk, Stanley has a national championship.

Redwine will lose a ton of points off this year's amazing squad.  But Kansas will be pretty good next year.  The question is whether he can build on this and compete on a yearly basis with the likes of Oregon, L.S.U. and Texas A&M.  The other question is whether he can breathe some life into the men's program as well.  I saw glimmers of hope even on the men's squad in the last few years but losing a stud like Mason Finley didn't help.

Is Kansas track back?  I'd say so.  Even though it's not there yet with the men's program, the building of a new track and field only facility will go a long way to making it happen.  Now if we can only get Adidas to give the team neon pink and powder blue uniforms...

Posted by Rink's Ramblings at 7:44 PM