A mere 12 years ago the world of track and field was abuzz because of a senior in high school who was poised to break Jim Ryun's land standing record in the high school mile.  Alan Webb smashed Ryun's hallowed mark at the Prefontaine Class running 3:53.43 and would go on 6 years later to set the American Record in the mile hitting the tape in 3:46.91.  Just a half dozen years ago Webb seemed lined up for an Olympic medal at 1500 meters when it all came crumbling apart.

Fast forward to 2013 and Webb, a mere 30 is an afterthought on the American running scene.  Which brings me to the newest high school sensation who is doing things that are for lack of a better term, Ryunesque.  Mary Cain, an outstanding high school runner as a freshman and sophomore, has made a stunning leap onto, the world stage.  Despite her record setting rampage, which began during the indoor season this winter, Cain doesn't seem to be getting a lot of love beyond the world of track and field. 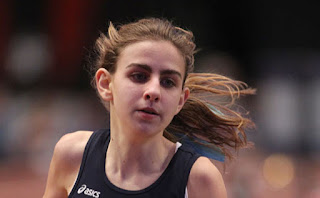 The records started falling for the Bronxville teen in February when she destroyed the American high school record for 2 miles.  She followed that up by taking down Debbie Heald's 41 year old high school indoor record not once but twice, setting the final mark more than 10 seconds under the old one at 4:28.25.  She topped off her indoor season by winning the U.S. Indoor Nationals beating a field of pros with a stunning kick.

The outdoor season started at Drake with another high school record at 1500 meters, ho-hum.  But the fireworks came this Friday night when Mary Cain blasted a 4:04.62.  That blew away Jordan Hasay's once epic record set at the 2008 Olympic Trials (already broken by Cain last year as a sophomore) by about 10 seconds and gave Cain an "A" standard and puts her in a position to go the World Championships this summer in Moscow.  We're talking about a high school junior.  We haven't talked about a high school junior doing things like this since the summer of 1964 when Jim Ryun made the U.S. Olympic Team at 1500 meters.

Getting more publicity than Cain's accomplishments is the fact that professional coach Alberto Salazar took control of her training regiment last winter.  Salazar made it clear after this latest record that Cain was already the real deal, long before he was asked by her parents to guide her career.  Yet despite all of incredible accomplishments, including a national title as a high school junior, you don't see Cain on Letterman like Webb.  There's barely been a mention of her on ESPN.  It's as if all this is happening in some sort of media blackout.

I think short of her winning outdoor nationals this summer and a place on the team to Moscow, I doubt she'll get the kind of media love she so richly deserves.  In fact, even that may not be enough.  You see, while Webb chased the magical sub-4 minute mile and Jim Ryun's venerated record, Cain is chasing records that are largely unknown and rarely discussed outside of the tightly-nit media that covers track and field.  But I don't care.  I can't wait to see her toe the starting line in person in June.  I can't wait to see history in the making.
Posted by Rink's Ramblings at 9:46 PM