I was out on a remarkably cool and dry sunset 8 mile run tonight when it dawned it me that it was 40 years ago that I had run my only State Outdoor Championship.  I had been scanning the results of the Kansas State Track and Field Championships earlier in the day looking at some pretty decent results.  As I enjoyed the very unusual weather for Southwest Florida I thought back to the blast furnace heat that had greeted the runners in Wichita.

The 2 mile hadn't gone so well.  A group of 5 was together at the mile and I got hit with an overwhelming wave of the need to go to the bathroom.  I hung on for dear life and tried not to crap by pants.  I finished 4th just a tad over 10 minutes.  I know that Jim Dillon of South and Mike Mueller from Northwest beat me and I think another kid from South was in front of me.  I was pretty unhappy.

The week of training going into State was lackluster.  I remember the big finishing workout was supposed to be a 1320 in 3:15.  That's really not all that fast but it was blazing hot and I slugged my way to 3:22.  It was a sign of things to come.

The trip to Wichita was long and dull.  We went down on Friday.  I didn't even bother going to the track to watch the 2 mile.  I went out to dinner instead with my ex-stepfather who lived there.  I had to share a room with shot putter Mike Wellman who would go on to win State the next year.  Mike had a lot of fun and made sleep a little difficult.

It was blazing hot when we got to the stadium around 11 a.m.  I think our race went off sometime after 2 p.m.  I spent as much time as possible under the stands in the west side of the stadium.  I felt it was too hot to warm up out in the sun so I slowly jogged back and forth under the stands.  I wasn't looking forward to what was to come.

I don't remember seeing any of the other mile finals from the other classes.  I came out from underneath the stands at the last possible minute.  12 runners lined up on the 6 lane, hard yellow track at Wichita State.  I was on the outside.  The gun went off and it was a jogfest.  All 12 runners were within 5 yards of each other for the first two laps.

Just about 10 yards past the 880 mark all hell broke loose.  I'm not sure who made the move but I looked up and the entire field was gone and I was dead fucking last.  I just put my head down and tried to make up ground but the heat was gobbling me up.  I caught a runner about 500 yards from the finish.  The race was unfolding a good 50 yards in front of me at that point.

Clark Hamilton of Shawnee Mission North was battling Kent Adrian from Wichita Southeast for the win.  Clark would take the race almost 10 seconds ahead of me.  If you look at the picture below that's Clark in the black and pink.  I'm hidden from view.  I think this picture was taken just as the break was happening.  I managed to reel in Eric Lathrop from South with about 250 yards to go but that would be it.  I would finish 10th in 4:36.

I remember crossing the finish line and thinking my feet were on fire.  The heat from the track was searing through the bottom of my spikes and my feet were burning.  I jumped down to the field which was Astroturf and sat down and ripped off my spikes.  The turf was super hot and everything felt like it was on fire.  I quickly got to my feet and made my way to a men's room underneath the east grandstand meekly waving to my ex-stepfather who, much to my surprise, came to see me run.

In the men's room is was cool and dank.  I spotted Adrian and offered my congratulations.  He was in a state of shock.  I think he was surprised that he had run so well.  We both agreed the weather was miserable.

The only highlight of the day was watching my teammate Tad Scales set a record when he won the pole vault.  It was the first of back to back titles for Tad.  But for me, it would be my one and only trip to the State Outdoor.  What a disaster. 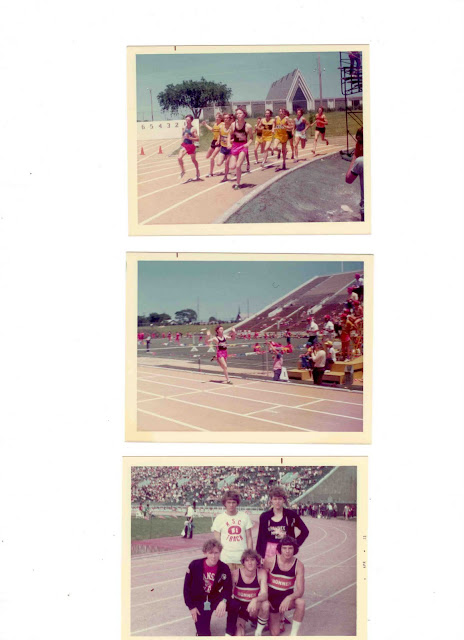 Posted by Rink's Ramblings at 7:06 PM