41 years ago I ran in my first Kansas Relays.  A nice autographed reminder came in the mail today to remind me of that.  As you can see, Jim Ryun is on the cover.  He was on his way to his 3rd Olympic team.  He would break 4 minutes for the last time on the stadium track on Saturday April 22nd.  I was lucky enough to witness it along with 20,000 or so others who gave Ryun a standing ovation after running 3:57.1 to beat Tom Von Ruden by almost a second. 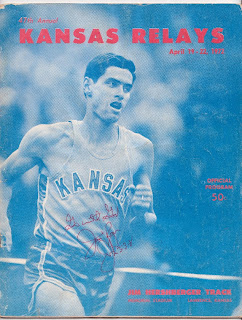 On page 17 of this program you'll find my name, along 12 of my Lawrence High teammates.  It meant the world to me to get to run in the Kansas Relays as a sophomore.  It meant more to me than getting to run at State, which I didn't do until the following year.  I ran in the Distance Medley Relay and the Mile Steeplechase.  Neither race went particularly well and I came out of the meet wondering if I really had what it takes to be a good high school distance runner.

The DMR was Friday morning and I ran the 1320.  We ran pretty poorly.  Vince Miller, another sophomore, led off in the 880.  Coach Steve Sublett had a tough choice between Vince and Clay Kappleman for that leg.  Both wanted to run it badly, my guts told me Clay would have been the better choice but I didn't have a vote.  I can't remember all of the splits but Vince ran around 2:08 which but us pretty far back in the pack.

Dave Crawley, a very good quarter miler ran the 2nd leg.  There were probably 12 to 15 teams and he probably got the baton about 3rd from last.  Dave picked off a couple of teams and I got the baton in no man's land.  I can't remember if I passed anybody or if anybody passed me.  I ran terribly though, splitting 3:25 when I was in shape to run at least 3:15.

Glen Lemesany anchored running a respectable mile in about 4:36.  I think our finishing time was a shade over 11 minutes.  We were all disappointed because we felt we could have run under 10:50 and been in the top 5.  I was really disappointed for Glen because he hadn't run fast enough to qualify for the Boy's Open Mile so other than the 2 Mile Relay the following morning, which didn't go any better it wasn't a great meet for him.

The steeplechase fell on the following morning.  I was hoping for a top 3 finish.  I had the luxury of practicing a few times on the track at K.U.  Kansas steeple great Kent McDonald had given me some pointers.  The most important advice he gave me was whatever I did, don't land on 2 feet in the water jump.

Of course, that's exactly what I did my first time through the pit and on the slick tartan my feet went out from underneath me resulting in a quick bath and sending me from about 5th to 10th.  I slowly worked my way back up through the field and was in sight of 5th place on the last lap when on the next to last hurdle Yael Aboulhalkah slid over on me causing another spill over the barrier.  I finished an embarrassed 8th.

I now realize I took all the bad out of the KU Relays and put it to good use the following Friday at the Shawnee Mission North Relays.  I was determinedly focused and ran 9:49.5 for 2 miles, which wasn't half bad for a high school sophomore.  Thanks for the memories Chris Ronan!
Posted by Rink's Ramblings at 6:14 PM