I rip on ESPN pretty regularly.  One of the few bright spots in recent years was the network's introduce of its 30 for 30 series.  The quality of these mini-movies or documentaries is outstanding.  But I have to be honest, last night's 30 for 30 which put my beloved University of Kansas front and center was a little weak.

"There's No Place Like Home" followed K.U. alum Josh Swade and his heroic efforts to bring the original rules of basketball to Lawrence.  The typewritten rules with James Naismith's scribbles are priceless.  Naismith invented the game while working in Springfield, Massachusetts but brought basketball with him to Kansas when he came to Lawrence to start the school's physical education program.

It took Forrest "Phog" Allen to invent coaching basketball.  Allen was no slouch winning titles and a record number of games.  From his lineage came other coaching greats such as Adolph Rupp at Kentucky, Dean Smith at North Carolina, Ralph Miller at Oregon State and John McClendon at North Carolina College.

Swade's quest, while admirable, seemed hardly worth a network documentary.  I only found the last 10 minutes truly gripping, as he fought the powers that be at the University of Kansas, enlisting the help of Phog Allen's grandson, Mark Allen, to convince K.U.'s biggest benefactor David Booth to bid on Naismith's rules.  Don't get me wrong, I enjoyed the story.  I think Swade's idea and hubris are terrific.  But the story appeals to a pretty narrow audience, namely Kansas fans.

The real twist in all of this is the lack of cooperation Swade received from K.U.  But that shouldn't surprise me, given the bureaucracy that surrounds the athletic department.  The fact that Swade got his project off the ground despite of the roadblocks is to be applauded.﻿﻿ 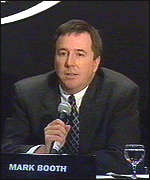 Finally, I admire the Booth family for some very deep and personal reasons.  When I first moved back to Lawrence in the fall of 1970 David's younger brother Mark, was my first friend.  I spent hours with Mark playing Strat-o-matic baseball, summer nights watching "The Tonight Show" and playing ping pong in his basement at all hours.

Gib and Betty Booth lived at 1931 Naismith Drive.  I lived on the other side of the Booth's backyard fence at 1934 Emerald Drive.  Mark and David's parents were terrific.  They worked hard to raise three terrific children that included a daughter, Jane.

My Christmas wish that winter of 1970 was to have K.U. season basketball tickets.  Gib told my mom he'd take care of it.  For two years I enjoyed bleacher seats on the floor in the northwest corner of Allen Field House.  Then Gib asked me if I wanted an upgrade.  Who was I to say no.  My senior season in high school I sat eight rows back, center court, behind the scorers table.  I had those seats for four years.  I saw some incredible basketball and two K.U. teams make it to the Final 4.

What the Booth family has done for the University of Kansas is beyond belief.  What Gib Booth did for me was to hand a rabid Jayhawk fan a lifetime worth of basketball memories.  I wish he was still with us so I could just say one thing, thanks!

Posted by Rink's Ramblings at 6:17 PM