Neil Young is on a multimedia tear in 2012.  Just a few months ago Neil delivered a new album of old music called "Americana."  Neil and Crazy Horse ripped apart a slew of American folk ballads and other classics.  But that simply wasn't enough for the "Godfather of Grunge." 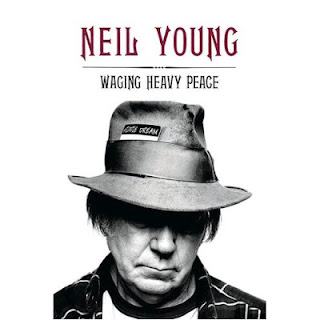 Neil Young and Crazy Horse will release a double disc set next month dubbed "Psychedelic Pill."  Coming right along with that release is Neil's autobiography which he had previously pledged never to write called "Waging Heavy Peace."  And if that weren't enough you can pick up Jonathan Demme's latest loving cinematic tribute to the great Canadian import called "Neil Young Journeys."  I almost feel like I'm on Neil Young overload, almost.

This week the New York Times trotted out one of the best sit down interviews ever with the enigmatic rocker.  The article is a delight and if it's any indication of what the autobiography will deliver, it should be a treat.  A lot has been made about the title of the article "Neil Young Comes Clean" and Neil's admission that he has smoked pot or used alcohol in a year or so.  I say big deal.

Neil Young is 66 years old.  It doesn't surprise me that he would step away from pot use, which I suspect was a daily habit.  Smoking of any kind isn't the healthiest lifestyle.  Neil had a pretty heavy duty cocaine habit back in the 70's that likely stretched into the 80's.  His habits certainly haven't taken away from 45 years of some amazing music.

As for the autobiography, I suspect he wanted to get his own story on the record after the release of the biography "Shakey" about a decade ago.  Jimmy McDonough's book is a great read and it gives some delicious insights into Neil Young's insecurities and personality traits.  As much as I love Neil Young, it's pretty clear that he's not an easy man to maintain a friendship with for any length of time.

And then there's "Psychedelic Pill," I suspect we're in for an onslaught of screaming guitar solo's by Neil armed with Old Black, his fabled Gibson and some great rock and roll.  The jams should be epic, just like Neil's life.  2012, Year of the Horse revisited, oh, check out that movie too when you get the chance.
Posted by Rink's Ramblings at 3:11 PM