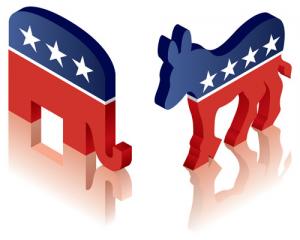 The politics of 2012 is largely fueled by email.  Yes, the television commercials touting both presidential candidates seem endless, especially in Florida, but the flood of email from the Republican Party and the Democratic Party makes up at least 25 percent of the incoming newsroom email these days.  I read almost none of it.  A quick scan and wham, into the trash.  Once and awhile I will file one because a particular candidate or office situated in our area is having an event.

I have received at least three phone calls from President Obama's local election office offering up someone to talk about one particular policy or another.  A couple of week's ago it was welfare reform and the other person on the phone couldn't understand why I wouldn't send a crew right away to listen to some lady pontificate about welfare.  Then the DNC called today asking if we wanted to do a satellite interview with Ken Salazar.  99 percent of the people in Southwest Florida don't even know who Ken Salazar is.  FYI, he's the Secretary of the Interior.  It makes me want to scream, stop, enough already!

But what's worse are the emails that come from the public.  A handful of folks love spamming us with emails to lay out blatant lies, always about President Obama.  The latest one touts that he's painted his campaign logo on Air Force One.  Another favorite bags on him for not visiting the World War II Memorial.  No, not the one in Washington, DC, but one in some far flung burg in Virginia.  Of course there are the birther cranks and other diatribes about the President's grand plan to bring socialism to America. I get at least one or two of those a week.

What's amazing is that so far none of this nonsense has come in regarding Mitt Romney.  The worst thing we've seen are emails from Senator Nelson's re-election campaign bashing his opponent Connie Mack for being a party boy.  That's news?  My guess is that supporters of President Obama have better things to do than bash Mitt with made up stories.  Then again, the same can't be said about half the crap I see on Facebook these days.  But that's a whole different blog!
Posted by Rink's Ramblings at 4:45 PM