Through the years I've been lucky to cover high school football as a statistician, a game producer and now I do it was a freelance writer for the local newspaper.  I have to be honest.  Through the dozens upon dozens of games I've only seen a handful of truly great high school football players.  The first one I remember is Steve Little of Shawnee Mission South.  Little was an all state quarterback and placekicker who was all everything as a collegiate kicker, went to the NFL where he flopped.  He ended up in a wheelchair after a horrific car crash.

My alma mater, Lawrence High, had an incredible reputation as a national powerhouse.  LHS wasn't very good when I went to school there but Bill Freeman took over after I graduated and pretty soon the Lions were back to claiming state championships on a regular basis.  The first of Freeman's titles came against a very good Wichita Southeast team led by future NFL running back Jeff Smith.

I saw some pretty good players at Lawrence High.  My classmate Mike Wellman played in the NFL.  Running back Steve Jeltz played major league baseball.  The best back was Mike Coleman who now works as a sports anchor in Kansas City.

The best high school player I had seen in person until last night was a running back from Tempe McClintock.  Brian Drew ran for 225 yards in the state title game to lead his team to a victory back in 1989.  He never amounted to anything.  I'm not sure he had the grades to even get into college.  Drew was remarkable and I saw him shortly after I had watched Kenyon Rasheed at Rockhurst High School and he was a mind blowing bruiser of a back.  Rasheed went to Oklahoma and had a short stint in the NFL. 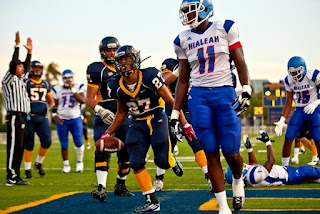 But last night I watched Naples High School's Manny Morgan for the second time in two weeks.  I knew he was a star.  His sophomore and junior years Morgan topped 1,000 yards and led Naples into the playoffs last year.  Manny was very good against Hialeah last week.  He ran for over 90 yards and barely played in the second half.

Friday night Manny shredded North Miami for 278 yards on the ground, 3 rushing touchdowns, plus a 73 yard touchdown reception.  He had a 37 yard touchdown run that made me gasp out loud.  I've seen a few spectacular TD runs in my day, but Manny's stop and go ability just took my breath away.

Manny Morgan is built.  He's probably 5-9 and 180 pounds.  He's good speed but not spectacular speed.  He can't run over people like Rasheed or run away from people like Drew.  What's incredible is his elusiveness.  He makes a shoulder dip, a stutter step, or a complete jump stop that leaves defenders grasping at air.

He's a great high school player.  I have no way to judge whether he can do this on Saturday's and in my mind it doesn't really matter.  I've had a chance to have a couple of short chats with Manny.  He strikes me as a good kid with his head on straight.  Hopefully he'll play college football and get a degree. And who knows, maybe he'll be playing on Sunday's in five years and I can reminisce about the great player I got to see when he was just a hot shot running back out of Southwest Florida.

Posted by Rink's Ramblings at 3:55 PM