One of the influences I've had on my family for better or worse, is running.  The Czarina wasn't a runner when I met her, Andrei never ran.  His sister Natasha and her husband Vlad never ran either.  But that's all changed.  They all run and as chronicled in earlier blogs they even like to race from time to time.

Vlad has the most potential as a runner.  He's a lot like his mother-in-law, the Czarina.  He's tough as nails and wants to be competitive.  That's not to say that Natasha doesn't have her tough side, especially in light of last year's half marathon effort.  But the arrival of a second child hasn't helped Vlad's training.  He ran 47:13 for 10K last month in Riga.  Now I'd be happy to run that fast right now, but Vlad's capable of running under 40 minutes, if he took his training seriously. 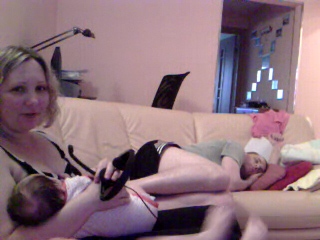 But as you can see he doesn't take his training too seriously.  He was supposed to be out on a 15 kilometer run, that's 9 miles for you metrically impaired.  Vlad decided to bypass the run in favor of his wife's birthday cake and this is the result, logging plenty of Z's but not enough K's.
Posted by Rink's Ramblings at 11:25 AM