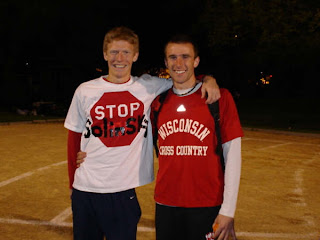 The impossible happened over the weekend but you wouldn't know it from reading any of the major sports publications in the United States.  The young man on the right, Chris Solinsky, buried the American record for 10000 meters.  In doing so, he became the first non-African to break 27 minutes.  His time of 26:59.60 also put a major crimp in the plans of one Galen Rupp.

The 10K race at the reknowned super speedway known as Stanford University's track was a planned attempt for Rupp to break Meb Keflezighi's American record.

I watched a recording of the race in complete awe.  With about ten laps to go Rupp rolled by the last of his two pacemakers to strike out in pursuit of the record.  The pace had started to wane and Rupp knew to reach his goal he would have to make a bold move.  Unfortunately, four other runners were towed along in the wake of Rupp's record attempt.  Rupp's frustration was clear as on at least two occassions he glanced back at one of his rivals, Liberty University's Sammy Chelenga, seemingly in a plea for help with the pacing duties.

Tagging along in the pack was Solinsky, making his debut at the 10000.  For a short time after the halfway mark Solinsky started to lose contact with the pack before fought through his difficulties and regained contact.  At about a mile to go Solinsky's old Wisconsin teammate, Simon Bairu from Canada, fell off the back.  Now only four runners remained.

Rupp forged on trying to break away but no one made a move until with a little more than a half mile to go, Solinsky eased his way to the front and began pulling away from everyone.  The last half mile he dispatched the field clocking a 1:56.1 on his way to the record.  Rupp was spent and had no kick allowing little known Kenyan Daniel Salel and Chelenga to beat him to the finish line.  Yet, even defeated in fourth place, Rupp too squeezed under the old American Record, hitting the line in 27:10.74.

It was a feast for critics of Rupp, who has come in for an unfair amount of criticism because of his relationship with NIKE and coach Alberto Salazar.  Rupp was brave in his attempt.  My only regret is the deafening silence from him and Coach Salazar.  I've not heard or read one word of congratulations from Rupp since this surprising defeat.  Solinsky for his part admitted that if there might be some bitterness given that he never shared in the pacemaking efforts.  I think Chris owes no apologies because the other runners had plenty of time to respond to his bold move with 900 meters to go.

One question remains in light of this weekend's dramatic run is this.  When will the other gentleman in the above picture make his 10K debut?  That question has hung over the career of former Kansas City area high school star Matt Tegenkamp for the better part of six years.  Tegenkamp, also a grad of Wisconsin, has been outstanding at 5000 meters, much faster than Solinsky in fact.  Matt is one of only three Americans to ever break 13 minutes for a 5K.  He just barely missed out on a medal at the 2007 World Championships.  My guess is Tegenkamp will give serious consideration to a 10K sometime this summer.  If he decides to give it a go we'll find out if Tegenkamp can beat Rupp or Dathan Ritzenheim for that matter, to the magical 27 minute barrier.
EDITOR'S NOTE:  Rupp finally talked to the media on Thursday about the race.  While he expressed disappointment about losing, he bore no ill will toward Solinsky and his sit and kick tactics.
Posted by Rink's Ramblings at 7:04 PM