In the Presence of the Lord 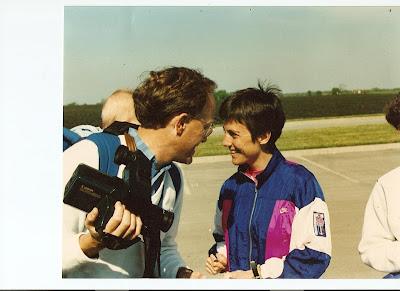 
After St. George the slow, arduous process of growing up started.  It's still a work in progress but I had to work at bringing balance into my life because in 1990, the way I was living my life wasn't working.  Tom Dowling certainly knew that.  Since the first time I had met him in 1985 he would poke and prod hoping that I would straighten up and fly right.  He never gave up on me.

Tom will probably rank as the most unforgettable character I have ever known.  He had this unique ability to make you believe that you were the most important person in the world to him.  He did this not just with tens of people... but hundreds if not thousands.  It got to the point that a group of us simply called him "The Lord."  As blasphemous as it sounds, you just had to be around him to understand the reverence we held for his views on running.  Tom would expound on Lydiard training, Eastern mysticism, and speculate on whether abstaining from sex would help in the lead up to a big race.  He was all over the map.  Many times you would just shake your head and chuckle, but he had a way of looking into your soul and getting at the heart of a problem.


In high school he was something of a phenom out of New Hampshire.  His big claim to fame was winning the Penn Relays boys two miles.  One notable competitor in that race was Bill Rodgers.  Tom started college at Kent State, home at the time of college mile star Sam Bair.  From what I can discern from his stories Tom didn't have the maturity to handle college life and being away from home so he ended up leaving school.

By the 1980's he was married to Marcia and they were both successful high school running coaches.  His claim to fame was coaching Cathy Schiro, now O'Brien.  A two time Olympian, as a high school junior she ran with the leaders at the 84 Olympic Marathon Trials before fading at the end to finish 9th.  She set a high school record that still stands and won the Footlocker Cross Country title that year.

About a year or so into our relationship he asked me to travel to Dallas to meet the great Peter Snell.  This Lydiard coached runner had won three Olympic gold medals.  When we landed in Dallas and went for our rental car Tom didn't have a credit card.  Marcia didn't trust him with one.  I rented the car for him and we went on an adventure that included spending the night with Peter and his wife Mikki.  They couldn't bare the thought of us staying in a hotel.  I videotaped about an hours worth of conversation between Tom and Peter.  It was an unforgettable trip.


A couple of years after my St. George PR Tom decided that he needed to run a Boston qualifier.  I gladly paced him for the 26 miles over one of Kansas City's notoriously hilly courses.  He started pitching a fit about 18 miles but a coke break at 21 revitalized him.  As we made our way over the last three miles the streets were lined with signs on stakes with the names of competitors on them.  Tom demanded that I find his sign and carry as a sort of standard barer.  I did so for the last two miles and he had his qualifier.


In 1994 Tom started having fainting spells while running and it was found he had a heart defect (just like Hank Gathers) and they finally got him on medication by early 1995.  He had just gone for his last treadmill stress test, passed with flying colors, got into his car to drive to work and suffered a fatal coronary.  He left Marcia and very young sons Sean and Sam.  His memorial service filled the Unitarian Church on the Country Club Plaza in Kansas City.  It was the same church were about four years earlier he had drug me off to see Ram Das, one of the most amazing experiences of my life.

Just before Tom's death I had just moved back to Lawrence and started grad school.  It was probably the most turbulent time in my life but Tom was there offering his sage counsel.  I had talked to him one on the phone last time not more than a couple of weeks before he died.  He had always worried about me and he was being his usual encouraging self.  I can't remember much of the conversation but what's always struck me is that I remember telling him how much I loved him.  Knowing that helped ease the pain of losing Tom.

He played a major role in putting my life on the right path and thanks to him I have two dear friends.  It's been almost 15 years and rarely a day goes by when I don't think of him or something he said or did.  He wasn't a saint and I'm sure he was a handful for Marcia at times.  And I choose to believe his impact is still being felt across this country in the lives of the thousands of runners he coached. 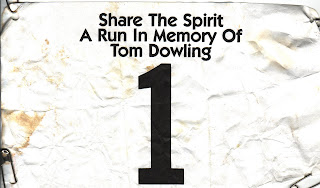 Posted by Rink's Ramblings at 8:44 AM