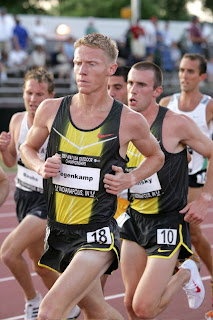 As the fabulous season for American distance runners winds down Matt Tegenkamp did his best tonight in Brussels to stake his claim as the greatest distance runner to ever come out of the Kansas City area. Tegenkamp blasted a 12:58.56 5000 meter to become only the third American under the 13 minute barrier. A week ago Matt's time would have been earthshattering for an American were it not for Dathan Ritzenheim's American record 12:56.27 last week in Zurich.

But back to the debate about Kansas City's greatest. Tegenkamp went to Lee's Summit high school in the eastern section of the metro area. He was a high school stud winning multiple state titles before heading to Wisconsin where injuries seemed to plague him in Badgerland. Once out of college he began to show the promise that had eluded him scoring an American record for two miles in 2006. He followed that with a heart breaking fourth place finish in Osaka in the 2007 World Championship 5000 meter race. He had missed out on a bronze medal by four-hundredths of a second.

By breaking 13 minutes in Belgium Tegenkamp fulfilled the promise many had been waiting for over the last three years. It wouldn't be surprising to see him take down Ritzenheim's 5000 record next year.

But until Tegenkamp does that I think he still falls short of Joe Falcon of Belton. Falcon is still the fastest high school miler to ever come out of the Kansas City metro area. He went to Arkansas where he captured six national titles at various distances, something that eluded Tegenkamp in college.

The pinnacle of his career came when Falcon won the Dream Mile in Oslo in 1990 in 3:49.31. Unfortunately a few weeks later the first of many injuries occurred and within three years his career was at an end. I have no doubt had Falcon stayed healthy he would have been the first American under 13 minutes for 5000 meters.

The remarkable thing that joins these two great runners is their high school coach. Dave Denney coached both while they were in high school.
Posted by Rink's Ramblings at 7:50 PM