Mantle, Mays, Musial, McCovey, Aaron, Robinson F., Robinson B., Killebrew, Oliva, Clemente, Kaline, Yazstremski, Spahn, Ford, Marichal, Drysdale, Koufax, Gibson Seaver, names that baby boomers who loved baseball have cemented into their memories.  These players marked the last great era of Major League Baseball when the sport held sway as America's National Pastime. It was baseball, not running that sparked my love of sports that exists to this day. 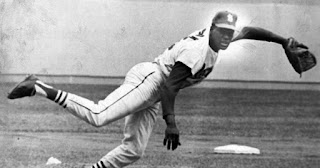 The past month has been especially tough for baseball fans.  Gone are Tom Seaver, Lou Brock and Bob Gibson.  Gibson's death last week really hit hard.  He was a central figure along with Brock on one of my all time favorite teams, the 1967 St. Louis Cardinals.  Gibson suffered a broken ankle that season but it didn't slow the St. Louis chase to a pennant and a world championship.

Head to the Sports Illustrated vault and you can read some great articles about that Cardinals team, dubbed the El Birdos.  Orlando Cepeda led that team at the plate while a makeshift pitching staff bolstered by a 22-year-old lefty, Steve Carlton, survived Gibson's injury to beat the surprising Boston Red Sox in a magnificent seven game World Series.  Gibson came back from the ankle break to win three games against Boston.

Gibson was a gifted athlete.  He was a top notch basketball player who bloomed late as a pitcher in St. Louis where he won two world championships.  Gibson glowered from the mound and served up a smoking fastball along with a devastating slider.  And being the great athlete he was the man could hit.

The Hall of Famer's 1968 season was the stuff of legend.  Gibson posted an astounding earned run average of 1.12 runs per game.  In today's game anything under 3 is considered outstanding.  That season forced baseball to make changes to take away the dominance of pitchers like Gibson.

I remember a commercial Gibson was in where he pounded fastballs into a sheet of clear plastic.  It was a rare commercial in its day.  You rarely saw an African-American sports star front and center in a commercial in the 1960's.

The sports heroes of my generation are slowly leaving the stage.  It causes my soul to ache.

Posted by Rink's Ramblings at 6:10 PM